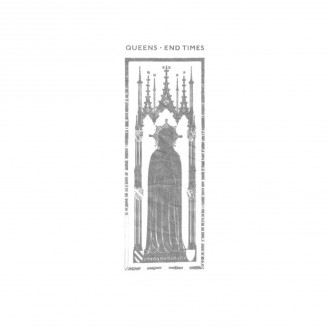 Play All LP
Scott Mou, known as one half of the duo Jane – the folk techno drone duo he had with Panda Bear - aswell as part of Manhattan's famous record store Other Music, debuts with his Soloproject Queens.

Johan Jacobsen describes the wonderful music of Queens "in oxymorons; "colorful monochrome," "myopic depth," "sad joy," "driven slowness," "enlightened darkness," "universal intimacy ' , "ethereal earthboundness" ... As it should be. Queens is one of those wonderful artists who are hard to catch on the fly, who escapes easy definition. His music is an unexpected and unimagined universe ready to be explored, and it’s a universe that is wonderful to be in."

When Dial Records' David Lieske and Peter Kersten listened to a performance of their New York based friend in 2009, it was one of those unforgettable unique experiences you only have once in a long while these days. The idea of releasing an album was born. The production of "End Times" involved other labelmates such as Phillip Sollmann aka Efdemin (recording), Kassian Troyer (mixing) and Hendrik Weber, who once joined a life performance on stage with Scott Mou in 2012.