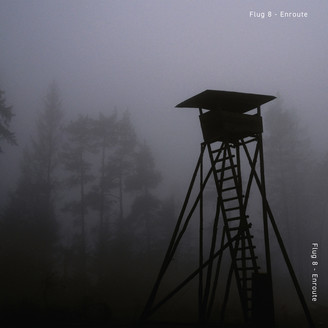 Herrmann is far from being unknown in the world of music - let alone in the art or photography world. In the music field, he is probably much more known under his Flug 8 moniker where he released five albums on Disko B, Doxa Records, Ransom Note, and Acid Pauli's Smaul Recordings. Under his given name, Daniel Herrmann's relationship with LARJ's label boss Ata Macias goes way back. As an artist and photographer Herrmann was the only one allowed to take pictures inside Ata's ROBERT JOHNSON club, thus creating an iconic series of pictures of clubbers and club life in general. Herrmann’s pictures of the partying punters themselves were presented as wallpaper all over Robert Johnson back in 2002.

With »Enroute« Herrmann enters new territory: It is his most ambient work up to today. And yes, it is a piece of work created during the lockdown. Herrmann's studio is situated in the outskirts of Frankfurt, near the forest - a quite remote place already in-between the Taunus mountain range. Imagine life during the lockdown in such a place … This is where Herrmann set up his former basement studio in the large living room with a variety of instruments besides a cozy fireplace spending warm light and warmth. A warmth that despite its seemingly rather "cold" atmosphere can be heard all over »Enroute«. Once you soak in the sounds (or get soaked into the sounds) of the first tracks like album opener »northwest«, »Fly By Wire« or the 11min »Dark Trace« you might feel this warmth too. A cold warmth you could say, yet a warmth that only modular systems and synthesizers can create.

There is a change of mood with »Intercontinental« - literally as it seems that Herrmann indeed is on an intercontinental journey here despite the strolls and long walks in silence through the Taunus forest. This is also the place where Herrmann took many photographs of the forest and its trees (to be seen on his Instagram account) - and the picture on the cover: This spooky yet fragile high seat in the mist in front of those trees. Yet darkness alone is not dominating this album. Even during these dark days, there was a bit of light at the end of the tunnel. And it shows in the beauty of »Bouncing Rays«.

»Enroute« is done all alone and in total isolation. And one can hear it. But it also invites the listener to be a part of this lonely world. And we all know that being lonely is made easier with someone on your side - »Enroute« to a better place. A place that isn't lonely at all.

PS: For all digital music lovers we have included two bonus tracks: The GLOK remix of »Bouncing Rays« and Herrmann's clattering and creaking tune »Economy« - enjoy!