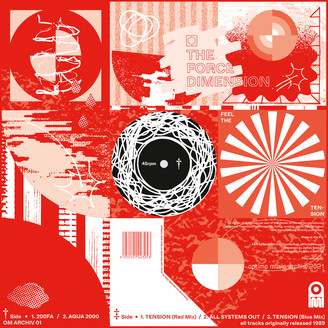 Play All Mini LP
This was Belgium. 1989. First wave EBM duo, but also so much more.

Optimo Music Archiv is a new offshoot label for revisiting music JD Twitch has been a big fan of for a very long time. This first release takes 5 Force Dimension favourites and reconfigures them as an extended EP / mini album.

The songs are untouched but have been remastered for 21st Century ears.

“Tension” comes in two versions, one from each version of their debut album. Oddly they put out an original version (Blue), they decided they didn’t like it and re-recorded it. Both versions of Tension rule.

200 FA is an end of the night anthem. A perfect piece of E Music that crossed over into the early 90s Rave era and still much sough after to this day.

Aqua 2000 and All Systems Out are too Belgian bombs that still slay dancefloors today.