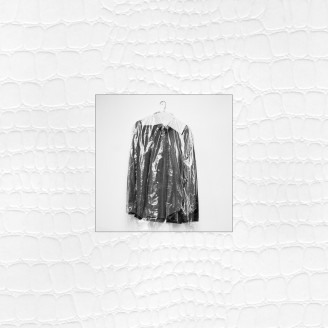 'Fences' is informed by the effects of travel on the brain: produced over the span of a year in various countries, it is in large part a recollection of what the mind chooses to imprint upon itself, and what physical sensations are dragged to the surface during a re-examination of those particular experiences. It is a deeply personal recorded exercise in free association resulting in a sort of sedated fever dream: Plucked and bowed strings reverberate densely through thick air against weighted persian rugs, while the voices of white-lacquered synthesizers cry out along the marble tiles of empty palace corridors; yellowed nylon guitar strings are rhythmically pounded against microphones between the mirrored walls of a hotel bathroom, their distorted signals captured and warmed on VHS cassettes before being ejected and thrown into the brackish water of a worn bathtub. Gathered and dried off, these aural relics are patched together into a delicate piecemeal - patent leather next to cashmere next to plastic next to lace - with visible seams but impeccable stitch work.

With 'Fences,' genres are either disregarded completely or shredded and re-sculpted into unfamiliar amalgamations. Pop songs are gutted and disemboweled before eventually being given a new skin of collaged features stretched tightly across their frames; the tired bones of dance music are stamped and shattered into shards, melted and re-pressed into pleasurable moments of introspection spotted with outbursts of anthemic extroversion. Roberts chooses to focus here on the unpredictable nature of the mind, weaving recalled experience with minor works of fiction. This is music from the forgotten film scores of discarded laser discs; the sound of memories re-quilted into slabs and thin-sliced into patterns which, when played back, conjure visions of the past and materialize impossible moments of Déjà vu for instances of the future not yet experienced.