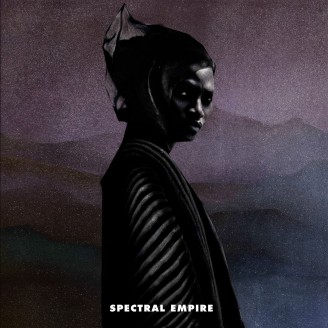 Play All 12"
Spectral Empire prove once again that they’re some of the deepest producers working today. The UK duo—George Thompson (aka Black Merlin) and Kyle Martin (half of Land Of Light)—make their Nuearth Kitchen debut with two tracks of stunning depth and range.

“Goloko Dhama” is one of those obsessive, white-knuckle pieces that seem too short, even at nearly nine minutes. It begins with muted, throbbing Native American tribal beats and an artfully cacophonous and warped metallic tone splatter. A disorienting, bass-y oscillation pulsates throughout the track like a forehead vein of an Olympic weightlifter, and with each passing minute Spectral Empire increase the music’s strangeness and intensity. A stellar example of spy-thriller disco, “Goloko Dhama” induces an exhilarating paranoia not unlike that created in Can’s epic “Mother Sky”; it keeps you moving while forcing you to look apprehensively over your shoulder.

Sadhus are ascetic Hindus who reject the material world for a life of prayer, chanting, and meditation. The track “Sadhu” seems like it could be emanating from a Nepalese mountaintop after a morning ceremony. It begins with exotic tintinnabulation, distant bass ripples, and celestial temple drones and then gradually accrues a steely-eyed, tribal-disco propulsion, accented by sputtering 808s that slyly allude to those in Plastikman’s “Spastik.” Spectral Empire keep the tension understated throughout while generating a tingly euphoria that’s all the more special for being kept on a tight leash. “Sadhu” is the soundtrack to a long journey in unfamiliar climes in which every stride and glance are supercharged with wonder.