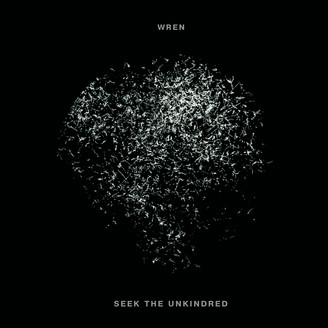 Launching into a monochromatic dirge, ‘Chromed’ announces the LPs stylistic intentions, forgoing the trappings of traditional harmony with deliberate pendulums of pitch and tone. Swarms of percussion drag the track to its conclusion in a collage of insidious feedback, with oscillations sculpted by the record’s producer, Scott Evans of Kowloon Walled City.

Elsewhere, swift variance is displayed in Wrens’ deft handling of genre and form, refusing to be solely one of either. The record courses between rigid post-punk, broad waves of dreaded sludge, and austere choral reverberations. Pulsating Krautrock themes present in their previous work are revisited, with a focus on embracing archetypal motorik technique, as the LP stretches compositions to their furthest tensions through profuse repetition, straining the cracks between.

Inviting physical, elemental surrounds into ‘Subterranean Messiah’, Wren allow space for the sudden cloudburst of Middle Farm Studios in the introductory passage via location recording, embracing the interplay between source and locality. Combined with the painterly fretwork and ghostly chants of Fvnerals, the collaboration seeks an emotive new path of melodic vulnerability. In contrast, the closing elegy is layered with disharmonious cycles of agonised cello from Jo Quail. As with other conclusions on the LP, the track's commitment to strained repetition is rewarded with sonic climaxes of blackened psychedelia, led by stalagmitic spirals of atonalism.

Throughout the LP, Wren draws from their long-standing apologue, with a partnership of vocalists showcasing a lyrical and vocal interplay thick with a dense lore new to their compositions. 'GROUNDSWELLS' brings Wren to an equinox in their earthly contemplations. Ruminating on the decaying inanition that engenders renewal, this record is a revelry in the cyclical, repetitious infinity of planetary permanence.