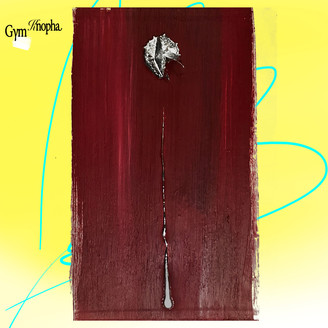 Play All Digital Single
Chinese DJ/Producer Knopha is releasing his latest 3 track EP “Gym” on Beijing’s Ran Groove, this is a record that confuses one's general impression about background music in interior spaces. Abandon consciousness and immerse fully, just like when you're lifting weights in the gym.

Few DJs on the globe - let alone China - traverse musical worlds as fluently as Knopha. It sounds like a cliche, but he is literally as comfortable smashing a warehouse rave with broken techno, as he is channeling the gentle seaside ambient vibe of his adopted hometown Xiamen.

It's with this versatility (meaning both technical skills and a monster appetite to find different styles of incredible music) that Knopha has earned a place in the top tier of Chinese dance music. He's done it in a characteristically sneaky way - just a few years ago, gigs were few and far between besides his own impeccably curated Beatween events (Orpheu The Wizard, MNDSGN, Yu Su, Mr Ho, Pender Street Steppers, Bell Towers, PLO Man and others). Noone knew how hard he was digging, and learning a production craft. When they caught on, things moved fast - Knopha quickly become the go-to to support cutting edge acts across the country (Efdemin, Hodge, Laurel Halo, Dixon, Project Pablo).

The Nothing Nil EP, released on Eating Music in late 2018, brought praise from major players including Hessle Audio boss Ben UFO. When Ben came to Oil in Shenzhen, he heard Knopha's warmup and immediately invited him to record a set for Hessle's legendary Rinse FM show. Other standout sets include Red Light Radio and NTS for Pender Street Steppers, each showing a different side of the selector. This summer, Knopha will tour 7 Chinese cities in support of his new EP 'Gym', released on Ran.

What to expect from a Knopha set? Safest not to expect at all - but if you must, think organic rhythms, psychedelic turns, head-snapping percussion and entrancing melody - flowing together as part of one unbroken narrative. And a mustache.