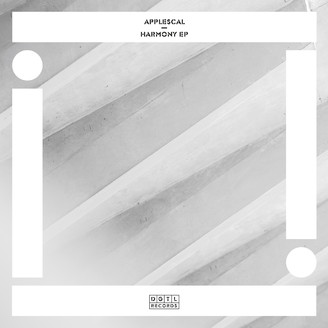 Play All 12"
It shouldn’t come as a surprise that Applescal is the next in line for a release on DGTL Records, seeing as he has been part of the crew since day one, with multiple appearances at their shows to his name. The Atomnation label-head crafts out three tracks all coming from one single studio jam, aptly naming them Harmony One, Harmony Two and Harmony Three. The record is a special one for Applescal himself as well, as it’s his first full EP in two years.

The EP starts off with Harmony One, a dubby and bass heavy track with a subtle vocal sample. It steadily builds up towards a more energetic part with synth stabs and heavy snares, while the pads in the background still make it keep its atmospheric feel. As all three tracks come from the same studio jam, it’s obvious that this was the start of the jam, serving as the basis for the other two tracks. The second one, Harmony Two, was previously part of an Atomnation sampler and received a lot of great feedback, as well as airplay from a few big names in the industry. It builts around an arpeggio that playfully progresses and intensifies towards the break, where a raw synth is layered on top for the climax. With a more subtle bassline, but multiple rhythmic elements that add a proper swing, it makes an essential peak-time tune.

The flipside brings Harmony Three, which distinctly sounds as the final part of the studio jam. Hard hitting synth stabs and a rolling bassline set the track apart as the heavier hitter of the three, while still clearly building on the overall theme. It features an arpeggio that progresses along the break and into the main part, with sharp drum samples and tense synths. It wraps up this release perfectly.