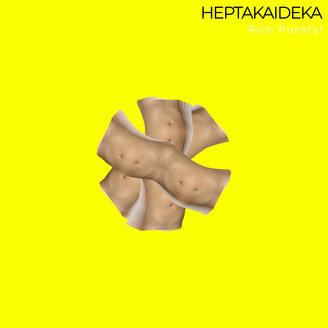 Play All LP+CD
RICO PUESTEL debuts on his TIME IN THE SPECIAL PRACTICE OF RELATIVITY label with a mind-boggling journey of 41 minutes — split in two parts to fit on vinyl! HEPTAKAIDEKA is what it won't be and will be what it never was: Something from in-between worlds, a place beyond far beyond, where time dissolves into relativity...

Every modern electronic music presenter should be able to find joyful, elevated, convulsing or simply useful moments within the extent of this track that is designed to have its inherent connecting factors and starting points in place for every DJ set — letting it be just a few minutes, well-placed groove looping or bigger amounts of its entirety for diving into a long night, bringing it to an end or making it standing out in-between.

Starting off with a hazy half-grasp hint of what's to come, a mysteriously pervasive bionic loop emerges, slowly coalescing with a bone-dry groove on the rise. Taking up a first quadrant of the track, already gnawing into the long-term memory, it manages to gradually establish itself along the pathway while the "rhythmatics" endure some subtle layer-shifting with occult-like strings come sliding in from somewhere unknown like an admonitory subtext.

Being halfway through (and all the way in), everything smoothly crumbles down to its basic framework, still shaking off its own reminiscences while foregone vestiges almost perilously try to reassemble themselves. All of that leading to a clearly unforeseen yet fortunate drift into a 1980's-like synth peak time section after about 27 minutes being in that track, finally cherishing an evolving emotional felicity and the climax of its own being that tends to feel like an overarching salvation.

As everything being eventually finite, the track starts to bring to mind where it came from by assuredly falling back into a story told before with the well-established bionic loop that once used to run free, sounding somehow different and more tamed now. Ending with dignity, the consistently resurfaced admonitory strings lead the way to its conclusion and possibly new beginnings, solely leaving behind the heartbeat-like booming that carried it all, now fading away...

Coming into existence during a series of multiple productions of exuberant proportions with Rico making the studio his citadel-like stronghold, this is an extensive story of desires, instincts, pride, fall, mirth, solicitude, tension, détente and basically life itself while subtly yet versatilely entertaining on a dodgy yet accessible level throughout the wingspread of Techno, House, Minimal, Dub, Electronica and Ambient influences.

The CD version not only brings you the title track in the guise of its non-split completeness but eminently churns out the extra drumming dub treat DEKAEPTA for a pleasurable groove-delight as well as the trippy bonus beauty VOSEM' that transits as a precious component of infinity.