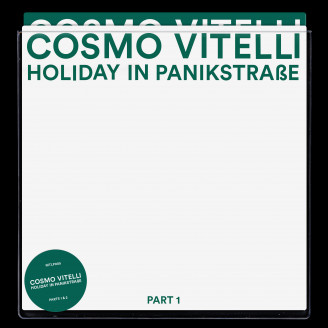 Play All 2xLP
Cosmo Vitelli hasn’t slept since 1973. Instead, he’s replaced slumber with the tireless exploration of electronic music, sharing his finds as an accomplished DJ and label manager as well as an esteemed producer, with heaps of records, remixes and edits under his belt.

After the major success of Part 1, Cosmo Vitelli & Malka Tuti are presenting Holiday in Panikstrasse Part 2, the 2nd and ﬁnal part of Cosmo’s 2XLP on the label. After collaborating with Fantastic Twins on Part 1, the amazing Julienne Dessagne’s vocals are back on Part 2 as well for the opening track Fragments of Reality. Another collaboration on the record is with Croatian singer and vocalist Tanja Vezic, whom we’ve already seen collaborating with Cosmo on his Les Disque De La Mort release, and who gives a cinematic sort of feeling to the track Party old boy. With “He just wanted to hang out with the DJs” Cosmo creates a slow burning dark banger that will not go unnoticed. The ﬁnal track Irritable is the perfect mixture between German Krautrock heritage and the French disco-synth touch of the 80s - emotional, growing and cathartic, one cannot stay indifferent to it.