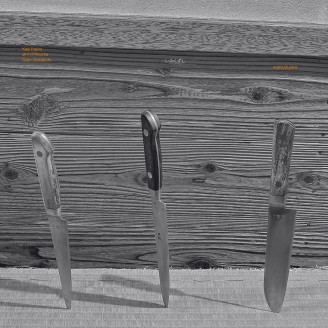 Play All 2xLP
The yearly summit of Keiji Haino, Jim O’Rourke and Oren Ambarchi continues with Imikuzushi, which finds the group extending the power-trio strategies of last year’s highly praised ‘in a flash everything comes together as one there is no need for a subject’ (BT05) and bringing to them a newly sustained intensity. For this performance, Haino limits himself to electric guitar and vocals, forming complex networks of slashing rhythm work, noise squall and chromatic shredding, moving at times to near-silent passages of howled vocals and isolated, hanging guitar strums. The tendency towards driving free-rock which surfaced on moments of the trio’s last release is cemented here, with O’Rourke’s fuzzed-out, non-linear bass riffing moving the music into almost garage-rock areas, combining with Ambarchi’s drums to form a bedrock of hypnotic, metronomic pounding which transforms itself effortlessly into passages of flowing free-time. Like all of Haino’s best work, the trio transcends any ‘rock’ genre exercise to enter a non-idiomatic zone of ritual intensity, creating a music formed purely out of instrumental and group-mind possibility. Presented as four unedited excerpts salvaged from an epic show that lasted well over three hours, the sometimes raw nature of the recording only adds to its directness and harshly emotive quality.

Released as a 6 panel digipak CD and as a limited edition double LP in a lavish gatefold with printed inner sleeves. Design by Stephen O’Malley with high quality live shots by Ujin Matsuo and stunning images by Tokyo based photographer and sound artist Shunichiro Okada