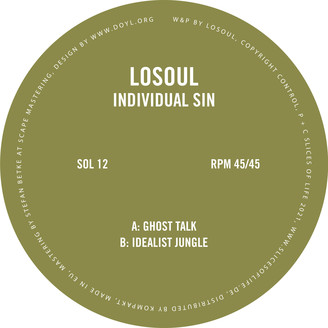 Play All 12"
Slices Of Life is proud to welcome LOSOUL with 2 timeless house groovers.

Losoul is without a doubt one of the more elusive legends of house music. Over the last 25 years he has been forging ahead expressing his own ideas of outstanding club music that not only satisfies the vibe of the dance floor but also takes risks, asks for interaction and demands personal exposure: energetic and ambivalent at the same time.

Since the mid nineties, when Losoul teamed up with the legendary Playhouse label crew, he has continuously developed and refined his characteristic style of house music that captures the essence of the groove while honoring the open spaces between. With this style he is still building bridges between the founders and the following generations of electronic music lovers. The extent of his mastery is evidenced through his comprehensive catalogue of releases on various imprints such as Logistic Rec., Hartchef, Hypercolour, Karat, Tardis and of course his own label Another Picture (founded in 2014).

The two distinctive tracks featured on this Slices Of Life release perfectly represent Losoul’s years of experiences in producing, technical developments and worldwide touring as DJ. Proving once again his particular skills and laid-back attitude yet sounding fresh and thrilling at the same time.

“Ghost Talk” is reminiscent of Losoul’s driving minimal productions of the ‘90s with its trippy atmosphere and spooky morphing voices. “Idealist Jungle” on the B-side leads us into a green, sweaty twilight zone, accompanied by continuously rolling beats and warm basslines.

Like most of Losoul’s productions “Ghost Talk” and “Idealist Jungle” evolve slowly and steadily build their energy over the long distance. Once started you are all at once captivated by the pulsing deep grooves and psychedelic atmospheres and locked into the seductive journey.
Vinyl Only!