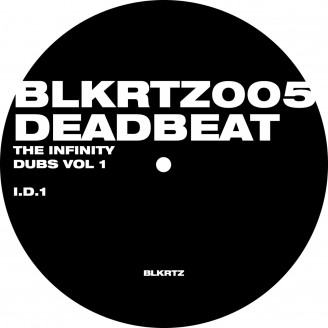 Play All 12"
Following on the success of last years Eight album, Deadbeat's first salvo of 2013 sees him settling into a looping state of mind with a new series of techno excursions ending in lock grooves entitled the Infinity Dubs.

Comprising two tracks efficiently titled ID1 and ID2, volume 1 sees Deadbeat deftly skirting the lines between classic techno and post-hardcore/garage dynamics with long patient mixes and elated dubbed out chord structures looping ad infinitum to the horizon to create 2 shuffling peak time rollers quite unlike anything else in his vast catalog.

Yet further confirmation if any were needed of Deadbeat's ever restless, forward thinking creative vision, and a promising sign of things to come in this on going new series.