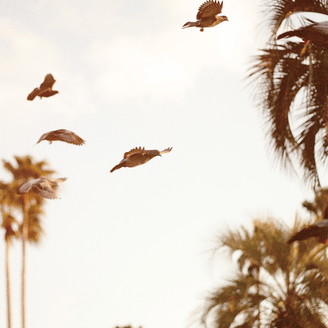 Play All CD
currently the rediscovery of long forgotten japanese electronic, jazz and new age music is at a peak like never before. but although many re-issues already flood the record stores around the world: the large, diverse musical culture of japan still got some gems in store that are really missing.

for example, it is still quiet around the the work of japanese bass player, new-age and ambient musi-cian motohiko hamase. when the today 66-years old artist started to be a professional musician in the 1970’s, he quickly gained success as a versed studio instrumentalist and started to be part of the great modern jazz isao suzuki sextett, where he played with legends like pianist tsuyoshi yamamoto or fu-sion guitar one-off-a-kind kazumi watanabe.

he also was around in the studio when legendary japanese jazz records like “straight ahead” of takao uematsu, “moritato for osada” of jazz singer minami yasuda or “moon stone” of synthesizer, piano and organ wizard mikio masuda been recorded.

in the 1980’s hamase began to slowly drift away from jazz and drowned himself and his musical vision into new-age, ambient and experimental electronic spheres, in which he incorporated his funky medi-tative way of playing the bass above airy sounds and arrangements.

his first solo album “intaglio” was not only a milestone of japanese new-age ambient, it was also fresh sonic journey in jazz that does not sound like jazz at all. now studio mule is happy to announce the re-recording of his gem from 1986, that opens new doors of perception while being not quite at all.

first issued by the japanese label shi zen, the record had a decent success in japan and by some overseas fans of music from the far east. with seven haunting, stylistically hard to pigeonhole compo-sitions hamase drifts around new-age worlds with howling wind sounds, gently bass picking and dis-creet drums, that sometimes remind the listener on the power of japanese taiko percussions. also, propulsive fourth-world-grooves call the tune and all composition avoid a foreseeable structure. at large his albums seem to be improvised and yet all is deeply composed.

music that works like shuffling through an imaginary sound library full of spiritual deepness, that even spreads in its shaky moments some profound relaxing moods. a true discovery of old music that oper-ates deeply contemporary due to his exploratory spirit and gently played tones. the release marks another highlight in studio mule’s fresh mission to excavate neglected japanese music, that somehow has more to offer in present age, than at the time of his original birth.