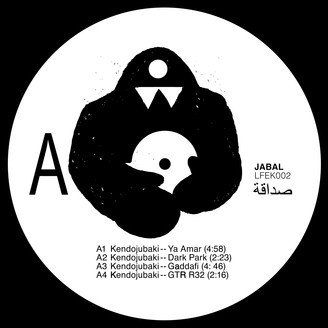 Play All 12"
Jabal is the title of the forthcoming release by Kendojubaki and Dj Ali through Berlin based Label ‘Live From Earth’. The release is the second instalment of the labels Live From Earth Klub series.

‘Jabal’ translates to mountain in Arabic. It is also where the two artists roots trace back to in their home country of Lebanon. The listeners receive a glimpse of the socio-political issues surrounding the jabal areas across Lebanon through unique sampling

Kendojubaki  Kendojubaki is the pseudonym of Adam Rajab, an Australian-Lebanese Sound Designer and producer currently based in Melbourne. As the son of Lebanese refugees he spent parts of his childhood working in his parents Middle Eastern supermarket. In times of recreation he and his relative Ali would pretend to be an Arabic wedding band playing the tabla and the mijwiz to imaginary dabke dancers.  Hatched from these activities and through years of back-and-forth between e Middle East and Australia, Adam has captured a unique sound-language which amalgamates traditional sounds of the Levant with modular synthesis, drum machines and industrial elements of unrelenting vim. His thematic music dwells on commonly unfair socio-political issues surrounding the east and the west, displacement and identity.

As a Dj Kendojubaki’s sets are filled with long Arabic intros, old school hardcore rave tracks and tempos above 140. In his own productions and live sets, kendo recombines his sound design influence into powerful and cathartic riddims, along with thick echoes un-natural like drums.

Dj Ali  Dj Ali is the stage name for Ali Chahine, an Australian-Lebanese live hardware act currently based in Melbourne, Australia. In his productions, Ali fuses sounds from his archive of field and foley recordings along with 90’s hardcore rave melodies to create an emotive flow of fast techno music.  As the son of Lebanese refugees, Ali also shares stories of conflict and socio-political issues through his music and art. In 2018 Ali joined the collaborative label ‘Al Gharib’ with relative Adam Rajab who is most commonly known as ‘Kendojubaki’s’. The two are collaborating on a 12” release named “Jabal” in December, released through Berlin label Live From Earth.