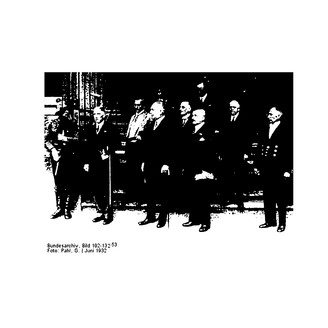 Play All Cassette
Shortly before the turn of the year 2017/18, my friend Jan Müller wrote me an e-mail: »Dear Martin, I'll send you the new album of my band ›Dirty Dishes‹ now. The album is titled ›Kabinett Von Papen‹. It is a concept album, which has the third-last government cabinet of the Weimar Republic as a subject. So, please tell me how you see it – whatever your verdict, I'll use it as an incentive to put my mind and body in the service of global pop culture even more so in the future«.

Dirty Dishes is founded in 2005 by Jan »Rasmus Engler« Müller (Tocotronic) and Rasmus »Jan Müller« Engler (MHerrenmagazin, Little Whirls, Ludger) when the two are bored during recording sessions for the second album of their group Das Bierbeben. Immediately, they write two pieces of music (»Bon Giorno«, which has alcohol and drug abuse as a subject, as well as »Drink a Coke«, a Brigitte-Mira-dedicated anthem for the caffeine-containing soft drink), which are released in the same year as a single under the title »Hurra…! Endlich Ferien!« on the label K.i.N.d.V. Two years later, the duo releases their debut album »Tea Is Not Our Cup of Coffee«. Here one can hear the first experimental and more conceptual works such as »Dirty Dishes as Goofy as Asterix«. The following albums (»Mit uns nicht!«, 2009, and »Von der raffinierten Kunst, jemanden in einen Tümpel zu stoßen«, 2013) juxtapose song and experiment. The first pure concept album, including now-permanent members ALEXANDER (Schrottgrenze, Station 17), Guido vom Flockenberg (Back On The Road), Isabella Stellmann (pedagogue) and Zopfus (ByteFM), is »Der Egel vom Tegel – Die kleine Rock-Operette der Dirty Dishes« (2010), followed by »Round about Ignaz Kiechle«(2013). The latter brings together songs that deal with significant events in the life of former Agriculture Minister Kiechle and were recorded freely improvised in just one recording session.

On the now-available »Kabinett Von Papen«, composed in monastic retreat, each piece is named after a minister from Papen's presidential cabinet (1.6.1932-3.12.1932) and represents them tonally and/or lyrically succinct.