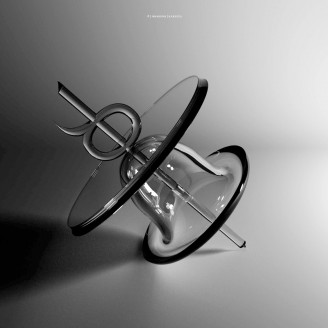 Play All 2xLP
« Sometimes, one does need to lose one self in order to find one self ».

This would be the normal start, breakfast tv / back of the cereal box philosophy for simpletons who think they're not. That is not what we are talking about here but one could get mistaken. As often with George. 'We lost George' is a recurrent theme in our offices, both literally and metaphorically. His 'travels', you can't always buy a ticket for... A guy who lost himself and the only one who knows the way back. At least that is what we thought. « The record and all it's different tracks are a kind of diary of the last ten years of my life. A process that began with the desire for a suicide, not a physical one but a mental ego-construct death of sorts » A few words about BK, Before Karezza... For all you young'uns, George was always a man apart. Even in his own band, The Micronauts, he probably did not fit. They still produced some of the most amazing « french » music [it did not sound french] of the late nineties. Let's pick up three favourites and you can do the rest: - ?THE JAG? : Jocelyn Brown dipped in sulphuric acid. Dipped Slowly. it hurts so good. - ?BRUCE LEE? [Underworld - The Micronauts remix]. Noise drilled through your forehead like a Mantra. Once again: slowly. A Pulp Ivan Smagghe's classic that he wishes he could still play. - ?BLEEP TO BLEEP?, album perdu, the end of travelling together, the beginning of new travels, inner and outer. From our point of view what started then almost looks like a retreat. Actually, it was a retreat: George locked himself in his [mind blowing] studio making music that would not see the light of the day, sacrificing young virgins [Kondrad Black, Jackson, Jesse Hearthrob] to endless nights of knob-twiddling. We lost George... And then we lost George. Travels, always travels. Tahiti [«I will finish that lp where I started it, looking at the sunrise from the same beach'-quote »], Mexico, India, Peru...Never Exoticism has more rhymed with mysticism. Trips are trips my friends, Especially for George. « The tracks represent the alchemical transformation that has been happening, is happening. they are the culmination of all this self work through tantric magick and yoga, gurdjeff's self observation exercises, meditation, Crowley and Spare's magickal systems, trips to thehimalayan foothills to practice & study with indian gurus and the Andes for ayahuasca ceremonies. They are a release/delving into deeply rooted subconscious material that found its way into the music. Almost all are one-off live recordings done in a trance. Other results were profound ontological experiences that shook me to the very core and changed my views on everything » So... First and above all, KTDJ kills hippies. George is not a hippy. He means every word above, a very serious enterprise of exploration this is. But as a label, it also took a very serious enterprise of... yes, exploration as well... Cutting down tracks that last 26' to 6' is a kind of exploration, spending afternoons in George's flat eating strange food then walking out in the streets like out of a dream, dipping into various bags. We shouted loud, we loved eccentrics. We got one. Along the way, there were a few staples, a few rocks we could hang on to while George flew: - His label, The Republic of Desire, born in 2004. Sporadic but magic [We still love Passarella Death Squad very much] - A few collaborations that could have grounded him a bit but did not: with fellow occultist Mickey Moonlight [?Santa Rosa Di Lima?], endless acid tweaking with Speedy J [?all in a moment? only avalable on the vinyl edition] and the [not really] lightening ?summer solstice? with Perc. - his constant and thorough 'doing things to the full', managing to get on board one of the biggest design studios in the world, M/M for his artwork, interpreting George's Sigil, his magic sign : [«it was done in Barcelona on NYE in an hotel room looking into the city?s most phallic construction which we celebrated as the god Pan while performing sex magick to launch the sigil. The union with the sigil must be total, which it was. What it means must not be shared outside of the confines of that moment »] Not exactly your classic graphic pitch... But you know what, we always had, all along the way, some kind of trust, probably based on our love of sweat and the inner-feeling that George's music, if it could sound cold to some fools, was immensely sexual. The sound of a backroom on the top of the world [Tibet that is], TB as Tantric Box. So now, here's Karezza [by the way, Karezza is not the soft feel of the wind on your skin but magick extreme tantric sex], the end of a voyage for us in a way, the beginning for you. A record to be proud of, albeit not an easy one. It has already blown away acid luminaries like James Holden, Ed Chemical, Piers Martin, Konrad Black, it will certainly enlighten many more in many dark ways.