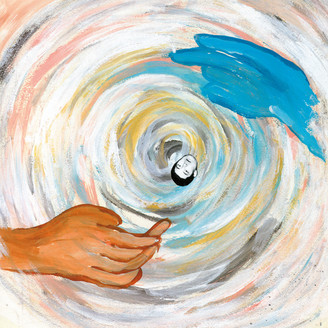 Play All LP
deeper and deeper: studio mule excavates another treasure from japan’s rich modern music history. this time spiritual leaning rhythms that come from none other then eitet-su hayashi, one of japan’s most renown taiko drummers, a percussive instrument that is deeply rooted in the mythology of japanese folklore.

with “kaze no shisha”, studio mule reissues a crucial album of his long-spanning career, that started in 1971, when hayashi joined the globally famed ondekoza group. the so called “demon drum group“ established the taiko drumming to a global audience and intensively toured around the globe between 1975 and 1981 - the year the group split.

shortly after, hayashi and some like-minded spirits formed kodo, a new drum troupe with hayashi as lead drummer. after their first live performances he left the ensemble again in order to launch his solo career, whose first output marked “kaze no shisha”, released in 1983 on the japanese subsidiary of the us record company victor.

the album’s six compositions feature hayashi on taiko drum and other percussion, famed japanese composer midori takada on marimba, cymbal and bells, shuichi chino on synthesizer, chi soungja on the traditional korean zither gayageum and the korean janggu drum as well as the singers kamur and tenko, also known as the honeymoons.

all songs have been written by eitetsu hayashi and been recorded between july and august 1983 at sunrise studio and victor aoyama studio in tokyo. it must have been an intensive time. a time, in which hayashi transformed the drumbeat of his heart into a variety sounds, melodies and rhythms, without losing the melancholic, yet demanding kaito air.

the record’s a-side starts rough and traditional with “kintonun”, a tune in which hayashi bangs the taiko stormy while charmingly dancing with chi soungja’s korean janggu drum performance. a propulsive start that slides into “cosmos” – a slow glooming melancholic trance-folk-spiritual tranquilizer, featuring hayashi playing the piano and koto, while chi soungja weeps ghostly on his gayageum zither.

a perfectly built folk drama, deeply charged with musical infinity. its followed by “kalavinka”, an industrial leaning composition, that lifts off with metal tones and meditative chanting, only to melt into a mesmerizing melodic marimba crescendo, played by midori takada. again, the myths of ancient japanese music kisses modern minimal realms and nothing seems to refer to the pure percussive genre hayashi is famed for.

the b-side opener “kaze no shisha” presents a slow growing performance by hayashi on the japanese zither koto. his nervous play transforms into a synth drone played by shuichi chino, that slowly makes space for hayashi’s tribal taiko drumming that again disappears in another wave of koto string notes.

the follow up “bakuon” launches with a supersonic transport sound and operatic singing by the honeymoons, that amalgamates with hayashi’s feverish performance on his main instrument, the taiko. every now and then strange synth sounds and disparate voices open the short composition, that abruptly ends after 2 minutes and 30 seconds. the final of “kaze no shisha” is reconciliatory.

on “seiten” hayashi creates a conversation between the taiko and mokugyo, also known as the buddhist wooden fish. they turn into some kind of call and response talk, always leaving enough space between the rhythms and tones to create a deeply spiritual psychic sphere.

an utterly captivating, keen to experiment album, full of japanese music mysticism, surprising non-linear shock-waves, repetitive minimal structures and frenziedly drumming, who in interaction introduce a less popular side of one of japan’s most prolific drum poets.