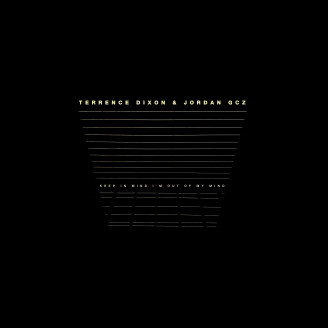 "In September 2019, Motor City techno legend Terrence Dixon made a rare trip to Europe. He was introduced to Jordan Czamanski AKA Jordan GCZ, a serial collaborator and electronic music improviser best known for his work as part of Juju & Jordash and, alongside David Moufang and Gal “Juju” Aner, as Magic Mountain High.

The pair hit it off immediately, so Czamanski powered up his studio and the pair began to jam. Over the following five days, the pair improvised extensively, stopping only periodically to drink coffee and discuss music, life and much more besides. While in the studio, they barely uttered a word to each other, instead responding almost psychically to the rhythms, grooves, riffs and musical motifs the other was spinning into the mix.

The results of these surprisingly magical 2019 studio sessions are showcased on Keep In Mind, I’m Out of My Mind, the pair’s first joint album and Dixon’s most significant musical collaboration since the Detroiter’s 2018 hook-up with German techno and ambient veteran Thomas Fehlmann.

In keeping with the project’s improvised roots, the six-track set is notable for its immediacy, pleasing looseness – it was mostly created using outboard equipment including synthesizers, drum machines and effects units – and sonic fluidity. It offers a neat, symmetrical blend of the two producers’ trademark styles, with Czamanski’s attractive chords, melodies and jazz-flecked motifs rising above hypnotic, cymbal-heavy rhythms that have long been the hallmark of Detroit’s sci-fi-fuelled techno sound.

It’s there, too, throughout the surging, deliciously percussive ‘Space Chime’, an alien-sounding concoction that sounds like it was beamed down from some distant galaxy, the warming-but-intoxicating minor key swirl of ‘Axis Mundi’ – a two-part slab of techno psychedelia full of trippy electronics, dystopian jazz riffs and intergalactic intent – and the pitched-down, mind-altering oddness of closing cut ‘Above Ground’, when the pair goes all-out in pursuit of leftfield techno perfection.

Created from scratch in a few days by two of electronic music’s most accomplished improvisers, Keep In Mind, I’m Out of My Mind is an exemplary meeting of musical minds and sonic sensibilities."