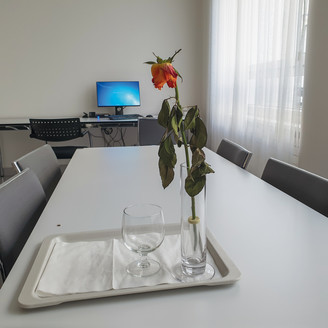 Play All Digital Album
Since its debut on two releases from 2011 and 2012 (the live Hit & Run with Joe Talia and the studio Audience of One), the epic structured improvisational piece ‘Knots’ has formed a staple of Oren Ambarchi’s live performances. Like a jazz musician searching for ever-new ways to play a standard, the guitarist has repeatedly brought the piece to life in a variety of settings ranging from guitar/drums duets to a large ensemble replete with string section, with each iteration bringing with it new variations of tone, intensity and character.

Knotting presents the entirety of a beautifully-recorded set performed by Ambarchi and the astonishing Australian-French drum virtuoso Will Guthrie in Geneva in February 2019. Beginning with a delicately played but rapid and insistent ride cymbal rhythm over which Ambarchi layers his signature shimmering Leslie cabinet guitar tones and eventually building, as the piece always does, to a peak of caterwauling harmonic fuzz and thundering drums, the recording also shows the pair taking risks and pushing the piece into new directions, especially in Guthrie’s willingness to let the central pulse momentarily die away or only barely be implied as his main focus of attention turns to instantaneous responses to the subtle rhythmic suggestions of Ambarchi’s shuddering guitar tones. Ambarchi’s performance also demonstrates the ever-evolving nature of his relationship with the guitar, making space for some of the more harmonically uneasy yet subtly lyrical playing (in a tone calling to mind the 80s guitar-synth work of Pat Metheny or Bill Frisell) that has emerged in his recent solo work. Ending with a remarkable coda where Guthrie’s bells and cymbals suddenly transforms the performance into something like Tibetan temple music, Knotting is an essential snapshot of the work of two musicians not content to repeat themselves.