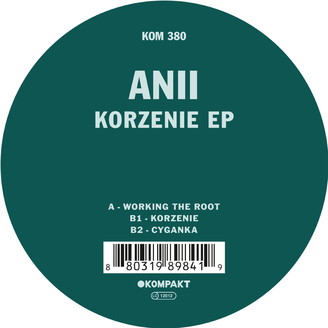 Play All 12"
Born in Poland and now operating out of the ever-effervescent London, the adoptive city where she’s learnt the ropes of music production and Djing, Ańii – real name Ania Iwinska – has lived many lives in one. Yet if one thing’s remained a constant over the years, no matter the harshness of the obstacles life threw at her, it’s indeed a deep and inextinguishable love for music; be it behind the mixing desk at Wired Studios or in her own Shoreditch workroom, the key place where she’s kept honing her skills with unfazed diligence, up to the point of making it her actual second home.

Ańii lands her debut transmission on Kompakt and surely not the last. Named after the Polish word for ‘roots’, ‘Korzenie’ finds Ania threading her way in between subtle deep-house and techno folds, delving into the essential strength of her past and present to carve out an hypnotic maelstrom of traditional Polish music strings, tribal percussions and elegiac melodies. Coupling eerie ostinatos with stealthy bass moves, it’s an ode to the magnitude of memory and power of resilience that reels out, blurring the line between late night club environment and further spacious, moony soundscapes.