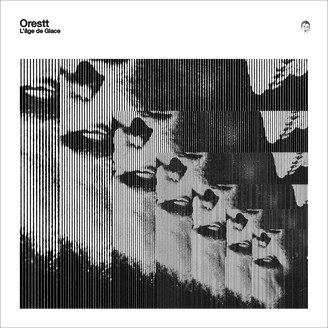 Play All 12"
Orestt is one of those talented producers with a sporadic discography that remains viciously underrated. On L'Age de Glace EP, the producer's first appearance on I'm a Cliché since the Moment of a Crisis compilation, we proudly present new material as well as a hard to find tune self-released by Orestt a decade ago.

1. Homies The EP opens with this slow jam initially released in an incredibly limited run in 2007, a plodding track where gloomy pads set the scene for a warm synth bass, raspy hooks and short vocal samples. Using just a handful of elements, Orestt delivers a fine slab of machine funk as timeless as it is groovy.

2. L'Age de Glace With an atmosphere indebted as much to the soundtracks of vintage horror films than to music of a cosmic persuasion, this is a track where droning pads, ominous sweeps, a meticulous rhythm section, strident leads and arpeggiated synths are used. It's pure hardware splendour that comes together to create a beautiful and danceable track larger than the sum of its parts.

3. L'Age de Glace (Jonathan Kusuma Remix)  Hot off the heels of his terrific “Gong 3000” EP on I’m a Cliché, Indonesia’s finest producer Jonathan Kusuma delivers a couple of spectacular remixes in his signature sound. With a tighter structure and a bass guitar groove tailored for the dancefloor, the producer’s touch is subtle but particularly efficient. This version is all about the interplay between the rhythmic section and a swirl of melodies gleaned for the original.

4. L'Age de Glace (Jonathan Kusuma Alternative Version) (digital bonus version) This digital exclusive brings a slightly different bassline and drums combination to the foreground. Additional production from Kusuma as well as elements from the original mingle, the result is a stripped-down rework. Once again, the combination of Orestt’s vibe and Kusuma’s touch makes for a brilliant track that elevates souls while making feet move.

5. Delta This is a dreamy track where mood is still cosmic yet the overall feeling is lighter than the rest of the EP. Beautiful synth leads, drum machine toms and droning pads showcase the lighter side of Orestt on this hauntingly gorgeous EP closer.