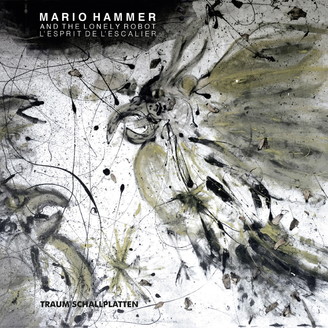 Play All CD
This full length CD album by Mario Hammer and And The Lonely Robot might come as a surprise to you, because you might not have them on the radar. But Mario has already left traces of his skill especially by releasing single trax of modular music on our series Tour De Traum as well as recording under the name of RWAC. Since then people had caught up on to him... like Robert Babicz who asked him for remixes and DJs like Dominik Eulberg who inspired him to leave the path of dance culture and to work just with sounds. The result is a 60 minute non dance full analogue piece of modular music: L’esprit De L’escalier.

Mario has been a fan of old analogue synths for most of his life and has teamed up for some tracks here with Josef Steinbüchel who shares a similar love for synths and has contributed by exchanging sounds as well as ideas. With "L’esprit De L’escalier" they have written 13 tracks over a period of a year. Many ideas were born in the process of writing. Only „Metaphysical Orchestra“ and Simiri (Hammeriosche Modulatschaltung) were released before on Traum and appear here in a different version.

Mario describes it this way: "I had very carefully selected synths to begin with. Each synth for me has an outstanding "color" in its sound. Josef had bought synths I had not and so we exchanged sounds and ideas on 4-5 of the tracks.   The album developed in this way that I started to write a track and I was looking for a transition to connect it too the next track and sometimes ended up creating a full track out of a transition. Sometimes I wrote a cluster of 3-4 tracks which I later completed by adding analogue clicks and noises.

Two tracks I wrote in one take and did not change. I must say I was amazed in how far things found their place... one pice of the puzzle settled into the next one. It was a spiritual moment for me."

The album can be divided roughly in two parts as the mood switches about halftime when "Yugon" introduces a beautiful and darker side...

The album starts with the pulsating "Mono No Aware" that sets a stream of sounds free not unlike a focussed intensive golden sun beam. When the track moves towards gracefully archaic melodies, you instantly feel drawn towards them as if your inner self had always asked for them.

"Chakwira" (walking through a muddy place making a squelching sound, African) starts directly with a polyphonic melody, dazzling in its melancholic tone. It blends over into the soothing and warm "Hyggelig". The word derives from the Danish language and means "a complete absensence of anything annoying and the pleasure of comfort" and we can hear this happening here alongside a superb enveloping sound as gigantic as the legendary synth sound on Vapourspace’s "Gravitational Arch Of 10" (Plus 8)

Then slowly the title track "L’esprit De L’escalier" cues in. It is one of two tracks with a length of almost ten minutes and the track makes use of a spectacular melodic sequence that changes in tempo and intensity and has feelings running high! The meaning of  "L’esprit De L’escalier" is: "the feeling you get after leaving a conversation, when you think of all the things you should have said."

Some of you will know "Metaphysical Orchestra" from the Tour de Traum X which we releases in July. It appears here in combination with another sequence, which fundamentally changes the feeling of the track. In comparison to the previous track it is very busy, very lively. It almost comes to a point where is virtually boils.

Followed by "Nyctophilia" which constitutes a strong contrast in every way and which seeks comfort in darkness to quote out of the CD booklet. It is the second of the two 10 minute tracks. It was recorded in one take and therefore has a strong live appeal including a gigantic break down about halftime. It might be the most epic track of the CD.

"Yugen" introduces the darker side of the CD with filtered down chords and sound forcefully rising to the surface as well as an oasis of quiet moments of happiness.

"Kaiho" almost sounds Asian in comparison and later when the track turns experimental gains movement which reminds us of early Pink Floyd.

"Symphony Of Pulsing" follows and the transfer is somehow incredible since with your mind still with " Sirimiri (Hammersche Modularverschaltung)" this accounts for a 360 degree change of mood.

We expect "Yuyin" to calm down and indeed the track is more loose and seems to have a stronger improvised end to it.

"Eigengrau" catches the remnants to form a track which connects to "Sirimiri" in style but makes stronger turns into a different direction.

"Nefelibata" is the so called outro track which in the last minute was enhanced with a beautiful  sound Mario Hammer came across bringing the album to an analogous end.