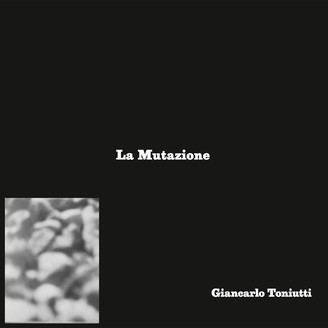 A milestone originally released in 1985 on the legendary Broken Flag label, Giancarlo Toniutti’s ‘La Mutazione’ is renowned in certain circles as a classic and with good reason. The album comprises of two subtle and haunting side-long explorations of dark cosmic electronics akin to Klaus Schulze, Cluster, Tangerine Dream and Conrad Schnitzler filtered through the lens of MB, Whitehouse, Nurse With Wound, and The New Blockaders. At the time, Toniutti had just enrolled at the Conservatory of Venice with a heady amount of education in Stockhausen, Schaefer, etc. These three musical poles come together in this beautiful and unsettling construction of layered static, analog synth explorations, concrete sounds and field recordings.This limited edition reissue is an exact replica of the original Broken Flag LP release, with remastered audio and an inner sleeve containing archival photos and sketches from the period that the work was created. Additionally this reissue contains a bonus CD of unreleased material from Toniutti’s cassette archive featuring a collage of sound sketches recorded during the same time period, thus giving the listener a wider view into the soundworld that helped form La Mutazione. Black Truffle is proud to present La Mutazione on vinyl for the first time since its original 1985 issue. A landmark release, it’s influence is still being felt throughout the dark corners of experimental music to this date.