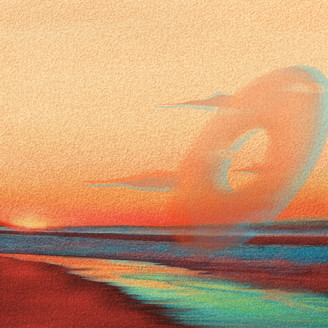 As a well trained keyboardist and dance music producer, you can find J.R.G.’s fantastic keyboard playing across the EP. Beautiful chord progressions with underlying pads, dynamic human arpeggiators, swinging bass lines, and the wavy solo parts bring these organic summer hits to life。This EP is not only the sequel to J.R.G. ’s 2018 debut album “Plastic n Ivory” (RGV007), but also a symbol of his ever maturing personal music producing style.

Michael Gonzales aka J.R.G. is a Shanghai-based DJ/producer. A California native, J.R.G. has been a musician for as long as he can remember, with a formative background in jazz, blues, salsa and rock. J.R.G. is proficient in a variety of instruments such as saxophone, trumpet, guitar and bass, however his main love remains the keyboard, which is often featured as a solo instrument in many of his arrangements.

J.R.G. grew up playing ensemble music, which provided a musical foundation for his transition towards house and dance music. He acquired an ear for dance music through underground clubs in Tokyo and New York and coming into contact with DJs such as Timmy Regisford, Louie Vega, Kerri Chandler, Tony Humphries and many others who were spinning in the clubs every weekend. What really stood out was how the tunes in these clubs combined house beats with techno, jazz, soul, african, latin and many other styles of music. J.R.G. has been busy trying to bring that musical philosophy to Beijing, throwing down on the decks at clubs like Lantern, Migas, Parnas, Ink, and various other venues, as well as releasing his own music on Ran Groove. In 2018, J.R.G. relocated to Shanghai, where he will keep spreading the house music he loves together with his label Ran Groove.