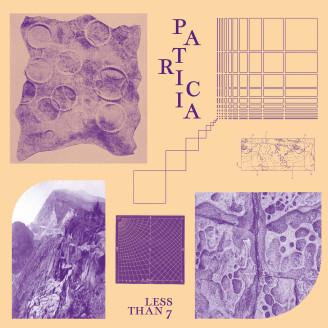 Play All 12"
After appearing on Acid Test’s 10 Year Anniversary compilation Patricia, aka Max Ravitz, debuts an EP on the label with Less Than 7, a collection of tracks that sits squarely in the club-focused end of the label’s output. Ravitz grew up in Chicago and has family roots in Detroit; these cities cultivated his affinity for mid-western dance music, with early Trax Records being a standout favorite. Years later, while living in New York, collaborator Alexis Georgopoulos introduced Ravitz to Tin Man’s Neo Neo Acid LP (released on Acid Test in 2012). This album struck a particular chord, impacting his creative vision for the Patricia project and setting him on the path towards a fruitful collaboration with Tin Man as Ociya (also released on Acid Test).

After 2021's IDM-leaning Blue Ridge LP, the Less Than 7 EP marks Patricia's return to the dance floor. Here, Ravitz explores four dimensions of acid music, each track deploying that classic squelch to differing effect. Both tracks on the A side pack a gut punch. The almost industrial beat on ‘At A. Gallop’ stomps along under moody pads and dripping acid lines until, midway, new harmonies reveal fresh vistas. ‘Head Gap Width’ is the EP’s most direct statement, a bolt of dubby techno energy with gurgling acid bass and rhythmic Detroit stabs. The B side then shifts things to a more emotive plane. ‘Winding To The Side’ uses its 9 minutes to fully explore the harmonic interplay between its buoyant braindance acid lines, which are engineered to suspend the late morning dance floor in time. ‘Coffee Computer’ closes things out, with its detuned pads, walking acid bassline and child-like piano lending it a wistful air that falls between house and IDM.

Less Than 7 was recorded at Ravitz’s home studio in Asheville, NC, and mastered by close friend Josh Bonati.