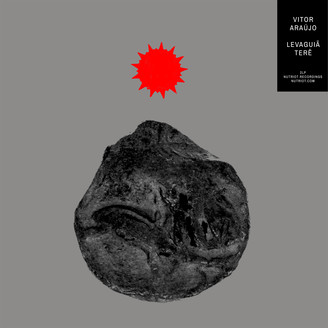 Play All 2xLP
When Theodore Adorno opposed the new musical paths heard in concerto rooms, in his “Philosophy of Modern Music”, to those of mass culture, he did not anticipated that from this antagonism would emerge artist that, from the new resources of the so called classical music, would produce a sound capable to encompass and instruct itself through the musical scenario consumed by the masses. The XXI century music is born with the sign of the harmonization of these two tendencies that the former century insisted in separate and oppose. Among the artists in the threshold of the millennium, Vitor Araujo is one of those capable of articulate the Brazilian and world- wide classical music avant-garde with the undisputable artistic conquests of experimental-pop music of his time. A lot of this is due to the formality of his musical studies. In his childhood years, the prospect of a concert pianist career was pervading. This took him to the study of the compositional skeleton of the great masters from Bach to Bártok, making it possible an intimate proximity with the noted production of music and its formal structures. Later, this experience was of great value for a singular contact with the universe of avant-garde jazz and also with acts from experimental scenario at the turn of the millennium – especially electronic music. All this background did not take place apart of the cultural universe in which he was living in. Herewith his diverse musical formation, the forms of urban, popular and folk music, related to his hometown (one of the greatest focal points that congregates the indigenous, European and afro-descent people in Brazil) and the rest of the country, pervaded the aesthetic formation of the artist. This is verified even in his first works, in his debut album “Toc” (2008) and “A/B” (2012). Now, in his third album, the traditional cadomblé rythms reveal the perfect harmony between his influences both classical and electronic. The sources bequeathed by Heitor Villa-Lobos and the instrumental slope of his spiritual disciple Tom Jobim; the timbre and acoustic experiments of Gyorgy Ligeti; the cyclic narrative possibilities opened by Steve Reich; the remodeling of sound manipulation tools by Karlheinz Stockhausen; are related not only to the vanguard of electronic music but even to the rhythmic and vocal expressions of Brazilian music – not letting this last one being used as in the fetishism ethnic so appealing to the so called “world music”, but thinning it and merging it with the main forming elements of the album ś atmosphere, hosting carefully the ancestry of Brazilian music in the sound universe of the XXI century. It is not possible in this work, called “Levaguiã Terê”, to trace a final frontier between the classical and popular experiences, among the track list or even internally in the tracks. In terms of genre, the album could even be classified as eletro-acoustic, since this compositional school operates easily with organic and synthetic instrumentation. However, the great orchestral writing, the heavy percussion element, the instrumentation and counterpoint elements, the harmonies and vocal arrangements, and the thematic and phraseology marks of the composer wouldn t́ be designated to justice by this genre denomination. For the same reasons, the elements of electronic music, that subvert and act over the acoustically recorded material – such as in the eletro-acoustic music – are mostly ordered by the pop music model, and not the classical ones, this last one not antagonizing the first. Thus, “Levaguiã Terê” is inserted in a disruptive way in the phonographic industry ś current streams. In concatenating regional styles with contemporary art, makes his country represented without sacrificing his most genuine roots. It is possible to risk saying that this language and sound aesthetic hybridism born in “Levaguiã Terê” seems to yearn the utopia designed by Alex Ross in his 2004 article “Björk’s Saga”. The utopia “of a future world in which the ideologies, teleologies, style wars, and subdivisions that have so defined music in the past hundred years slip away. Music is restored to its original bliss, free both of the fear of pretension that limits popular music and of the fear of vulgarity that limits classical music. The creative artist once more moves along an unbroken continuum, from folk to art and back again.”