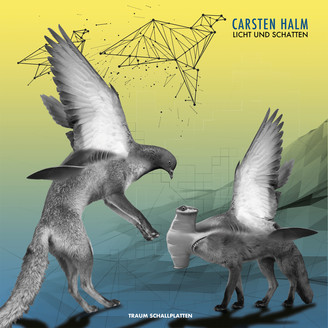 Play All 12"
We are happy to release another vinyl 12“ with Carsten Halm adding up to the series we have released with him so far. This ep marks the end of the series, but not the end of the relationship with Carsten. Carsten has been very successful with his releases on Traum starting with his "Taubenflug" ep in June 2020 followed by "Fuchsbau" and "Hammerhai". As we stated with his first ep: „His music has the unique quality to bring people together and experience something very positive“. Carsten showed this quality with all of his eps and last but not least this also makes him a popular DJ. Carsten plays clubs all over Germany but he still sticks to his roots and organizes parties in his hometown Cologne in his own dedicated space which he has rebuild with his friends after it was destroyed last year.

The fourth vinyl release with Carsten Halm "Licht Und Schatten" highlights another cover design by graphic designer Daniela Thiel and shows collages of the animals in a similar graphic context as his previous releases. The idea was to keep the graphic idea of the series but to use only artifacts of his previous designs to create a new cover.

The ep kicks off with "Licht" a track that has the quality to embrace you emotionally as well as musically with a massive warm and widening synth sounds that is a true a-side tune.

"Chimäre" instead is more jumpy and good natured, resulting in a nice break to carry the listener throughout the track.

"Schatten" kicks off with a rather dry drumming but in the course of the track is joined by a merry melody which is pushed aside by a bad ass rectangle synth sound that inflates the track with a techno spirit that is very welcomed at open airs.

The ep closes with the track "Notes" a horse ride though valleys of sparse vegetation with a happy sad Morricone inspired soundtrack that is very easy to like.