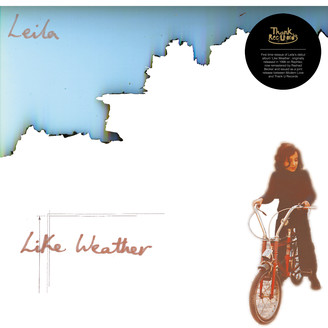 Play All LP+7"
• 22nd anniversay reissue of one of the greatest albums ever made • Originally released on Rephlex in 1998 • Newly remastered by Rashad Becker, cut by Lupo • Vinyl includes a limited edition bonus 7”, like the initial run in 1998 • ‘Like Weather’ has been unavailable on any format for years • RIYL: Prince, A Guy Called Gerald, Mica Levi, Tirzah, Jai Paul, Autechre, Rick Rubin, Yves Tumor

When you make a record that doesn’t conform, expect to divide opinion. ‘Like Weather’ was released in 1998, on Rephlex - run by Grant Wilson Claridge and Richard D James - an often great label that had a following largely made up of aphex-logo wearing fanboys who couldn’t quite deal with electronic music made by a girl - let alone one that used vocals. Everything those lads couldn’t fathom about ‘Like Weather’ is essentially what makes it untouchable; one of the greatest, most effortlessly esoteric pop albums ever made, not in the lineage of IDM or Trip Hop, genres it has so often been awkwardly lumped in with, but something else that cant quite be categorised - even 22 years later. ‘Like Weather’ echoes the world-building energy of Prince’s ‘Sign O The Times’ - every track is a self contained universe all its own, there are no rules or conventions - it’s full of hooks, but also insular as fuck, the production is all over the place and it still sounds like nothing else (although if you’re into the Mica Levi-produced Tirzah album, know that this here is the aesthetic, spiritual blueprint). It feels analog, then digital - it’s R&B, but also baroque music box, drone pop, experimental, electronic, junglist - attempting to define it is like trying to cup mercury in the palm of your hands; it’ll just find something else to slide into. In 2020 we reckon it’s time to re-appraise ‘Like Weather’ as one of the great “lost” albums of our age, made by a female auteur operating in an overwhelmingly male-dominated scene at the turn of the century. Now newly remastered by Rashad Becker (a long, 6 month process - trust that a lot of work has gone into it) - it sounds fucking amazing, one of only a handful of records that have never left our side these last two decades. So yeah, we could write a long thing here about Leila’s background playing keyboard for Bjork, her meeting with the Rephlex lads, the Aphex connection etc etc, but ‘Like Weather is a record that needs no hype - for real - listen to it and you’ll know.