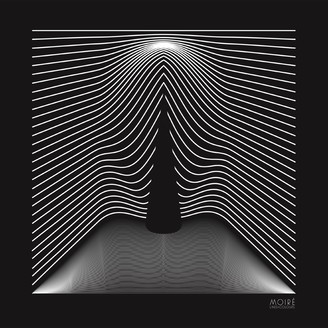 Play All 12"
London-based producer Moiré may have a background in architecture, but if his music were houses, they’d be the kind you find in Escher paintings. The rhythmic foundation wobbles and shifts; flickering synths pulse in and out of time, and the blank space between the elements feels ominous and imposing. They’re also inlaid with hundreds of tiny details: deep inlays of electronics, gentle waves of sound, scuffed-up techno and low-light dance music, as much shadow as sound. Even his name hints at that contrast. A design term for the process in which one set of lines is laid, at a slight angle, on top of another set of lines, causing distortion, it hints at both the symmetry and the deliberate imperfections in his music. “One side of it is actually describing the process,” he said in an interview with The Quietus, “and the other one is mentioning that unwanted error which can actually turn into something that you want.”

As a teenager, Moiré would sit in his bedroom, using his cassette recorder to capture strange, distorted noises. Eventually, he began crafting songs with a friend inspired equally by the rhythms of African music and jazz as the music of Mobb Deep and Wu-Tang Clan. Though he loved that music, he also longed to move into more dangerous sonic territory. He was encouraged when he saw Darren J. Cunningham, who records as Actress, play at a the second Brainfeeder party in London, because it solidified his belief that there was an audience for the kind of music he wanted to make. He released his debut EP, Never Sleep, on Actress’s Werkdiscs label in 2013 and, one year later, released his first full-length Shelter to instant acclaim.

Now comes Lines + Colours, Moiré’s first EP for Ghostly, and one that is even tenser and more spacious than his previous work. Songs are pared down to their essential elements: quick blips of sound, minimalist rhythms, quick flashed of vocals that are more texture than sound. Overall, Lines + Colours is starker, a move from cool neon to outright black and white. On “Brixton,” the same two-note phrase blinks over and over, and the song’s use of symmetrical structures slowly becomes hypnotic the longer it goes on. The title track is more hectic – darting pointillist electronics and a dry, steady rhythm – but it also sticks with a circular shape, layering in faint whispers of sound in the backdrop, but never diverting from the established melodic pattern. As its title implies, Lines + Colours is about getting down to the basic elements – shape and shade – and exploring all of the ways to use them.