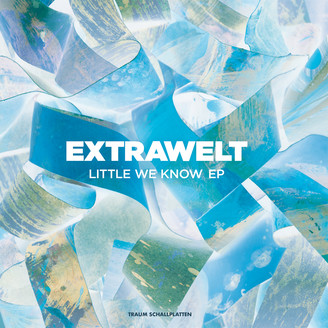 Play All 12"
Extrawelt are busy this year and a buzz for their new music already exists so we are exited to release their brand new EP for Traum.

Their opening track "Mr Wednesday" is probably one of the most adrenalin packed tracks we have heard for a while. The track is a beast of a techno track constantly changing its color in a pace that pushes you to the limit. Don’t you think the break will give you relief, the opposite is the case... the break here seems to spark off new energy. Extrawelt do what they do best by letting their synths speak in a human syntax! And man how upset "Mr Wednesday" is! Raging with anger this track goes berserk and cries out loud. This is techno with its original message to shake off the dull skin of everyday life offering a parallel more personalized world. This is a topic which could not be more up to date.

The second track "Little We Know" is nothing less than a rocking bass-line funketeer but draws more on a melancholic state at times. But since we know Extrawelt it is not for long until they drop an uplifting sick theme in retaliation. This track is an emotional rollercoaster by any definition. And it has the surprise at its side for example you will suddenly hear a melodic theme which you would like to hear in a new episode of Dr WHO !? It is very clear by now that Extrawelt are full of creative ideas and could probably make a stunning bass drum out of a banana.

The third and last track "SEM" features a flow of heavily changing sequences but more in a way that sees the sound settle down, as we know it from dub music. Which is a good thing to do after two tracks that are tempo reflecting trax. Having said this Extrawelt spit out a machine made hi-hat pattern that elevates also this track towards techno madness. If you have ever seen one of Extrawelt’s live acts this EP very much verifies that. The flow of energy they generate can be highly addictive.