Live In The Batcave 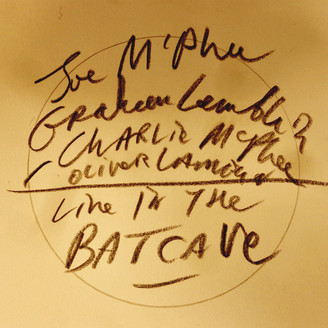 Play All LP
Black Truffle invite you to an evening of drunken revelry in the Batcave! After a chance meeting at a local supermarket in Poughkeepsie, New York, Joe McPhee and Graham Lambkin have performed together as a duo extensively in recent years, in addition to their joint work excavating some of the wildest tapes from McPhee’s archive for Lambkin’s now defunct Kye label. Live in the Batcave documents an evening the two friends spent together in the company of Joe’s brother Charlie and Lambkin’s son Oliver in November 2017 at Charlie’s house in Poughkeepsie. The LP captures seven increasingly drunken snapshots of the four shooting the breeze, playing flutes and whistles, drumming on anything at hand, and playing records.

Edited together in Lambkin’s distinctive style of lo-fi domestic tape collage, the multiple simultaneous cassette recordings of the shenanigans abruptly cut in and out and fall out of sync, creating disorientating, woozy echoes. Mics are bumped, stories are told, drinks are poured, text messages arrive, and AACM-esque flute jams are interrupted by violent bursts of laughter and wet-mouthed sound poetry. All the while, classic soul records play, initially in the background, but coming increasingly to the fore until the record culminates in a strangely moving free-associative singalong. Presented in a gatefold sleeve with extensive photographic documentation and liner notes from Joe McPhee, Live in the Batcave is a truly unique document that exists somewhere between free jazz, audio verité, performance art, and everyday life. File next to your copy of Das Kümmerling Trio. ‘Our music was born from the sounds of jazz, funk, soul, noise … sounds with no other reason so exist, except because they did, sounds which occurred like putting one step in front of the other to see if the way was clear to take the next step. The plan was, there is no plan, just start at the beginning, end at the end and party like it’s 1999’ – Joe McPhee