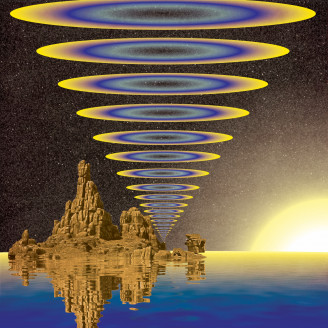 That summer I developed somewhat of an obsession with Tonto’s Expanding Head Band after having seen them perform at the Big Chill festival that year. The music blew my mind. Later upon my return to civilisation and the ensuing 'research' which then began in earnest I became as much blown away by the enormous T.O.N.T.O. (The Original New Timbral Orchestra) modular synthesizer that had created the music as I was by the music itself. Built in the early '70s, it's still the largest synthesizer around today. With the live show still resonating in my head I tracked down everything Tonto had ever recorded. One of these tracks was an obscure outtake from the time T.O.N.T.O.’s creators, Malcolm Cecil and Robert Margouleff, were producing and engineering for Stevie Wonder in the ‘70s (https://youtu.be/wuaSzFf7yq0). The track, Bittersweet, only ever appeared on a highly limited self-released CD put together to coincide with their appearance at the Big Chill. Consequently I featured it on a few mixes I did over the years and invariably I’d be asked “what’s that track?” by those with an ear for something unique. And invariably these same people, many of them DJs, would turn away disgruntled when I informed them it was CD only. Although I didn't know it at the time, the seed was definitely sown for this vinyl compilation that you now hold in your hands.

I first contacted the multi-Grammy award winning Malcolm Cecil in 2015 not long after Invisible, Inc. had launched with a proposal to putting the track out. There was always the question of what else would go on the record alongside Bittersweet? More Tonto tracks? Tracks by other artists? Other reissues? New material like the Invisible Family series? Or should it be just a single sided colour vinyl 12” celebrating the majesty of this wonderful piece of otherworldly yet emotive downtempo synthesizer funk?

As time rolled steadily onwards I realised at the end of 2017 that the 20th Invisible, Inc. release (a fair landmark for a small independent label) would soon be upon us.

I’d always thought of celebrating reaching the 10th, 20th, 30th release with a mix CD using tracks from the back catalogue.....but by the time INVINC 10 came around I'd missed the boat. I decided I wouldn’t let commemorating the 20th release slip me by and a compilation seemed the most fitting way to do this...and why not go the whole hog and spread it across two discs, house it in a gatefold sleeve and turn it into something rather special?

It took three years. From first contacting Malcolm in 2015, until shortly after his 81st birthday in January 2018, that we agreed to reissue the track on vinyl! The timing was perfect.

The hunt then began for other music to compliment Bittersweet. I'd heard some remixes legendary cosmic DJ Daniele Baldelli and Marco Dionigi had done of '80s synth pop/electronic founding father Richard Bone that had appeared digitally that I immediately thought would fit the bill. Likewise I'd heard an astonishing collaboration between psychedelic techno/dub duo log(m) (formerly Legion Of Green Men) and ambient pioneer Laraaji that seemed greater than the sum of its parts (keep an eye out for a double album from this melding of minds in early 2019). K. Leimer was another hero of mine, active since the '70s, who I'd been in touch with for a few years. We'd never managed to get a full album off the ground so I was thoroughly over the moon to get a contribution from him for this compilation. Many emails and Skype calls later and the rest all fell into place. I'm so proud to be able to also feature the music of Baikonour (another long time favourite), Eva Geist with Epsilove, Randweg, Causa, Ulysses, and of course those that have already appeared on Invisible, Inc. previously: the inimitable Secret Circuit, Sordid Sound System, Komodo Kolektif, Higamos Hogamos presents Spacerocks, Bal5000, Natural Sugars and Bronze Savage. I couldn't have done it without these people, many of them on board from the very beginning and who I love and respect all the more for it. Invisible, Inc. wouldn't be what it is now if it weren't for them.

That being said, “Lost Transmissions From The Off-World Territories” is just a tiny fragment of some of the amazing music available to us today. I urge you to further explore the artists represented here. Some of them have a body of work surprisingly different from the piece of music you are listening to right now. I'll let you go down the rabbit hole yourself. This process is fun if you like a good dig....but beyond that is that every so often you'll find something, as I have done, that'll completely take your breath away and move you to marvel at what an incredible world we're living in; where music can express our most abstract thoughts and deepest feelings in a way that words could never do. Enjoy!