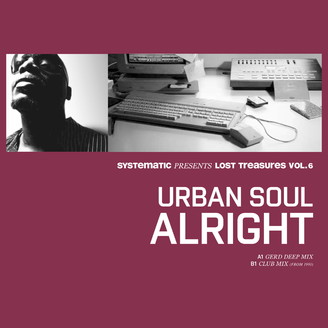 Play All 10"
Roland Clark has without any doubt written house music history. Under names like South Street Player, Dark Clark and of course Urban Soul he has influenced the evolution of house music like only a few others. His different vocals on Fatboy Slim´s records are timeless, such as „What the f*ck“ and „Song for shelter“.

Gourmets of old school house music become excited when they listen to Roland´s „Alright“. The song, released in 1991, became a milestone in terms of soulful house, in the same way like Adeva´s „Respect“ and Terrence Parker´s „Love´s got me high“.

Marc Romboy has re-explored this pearl for his series „Lost Treasures“ and was able to convince Roland to release it again, fort he nyoung generation and fort he old school lovers.

The package comes along with a respectful interpretation of no one else than Gerd (Clone, 4 Lux) and the fine remaster of the original club mix from more than 20 years ago.