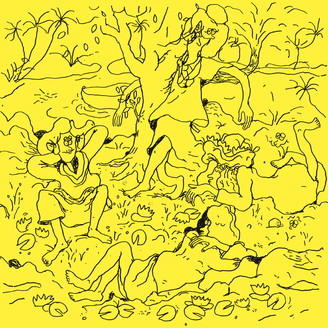 Play All CD
did he ever really leave berlin? yes: sascha funke was regularly in cologne. but then nowhere else. sure, as a dj and live artist he travelled around the world. but as a producer he always remained true to his peer labels bpitch control and kompakt with some minor exceptions.

a step out of the usual environment, not only in terms of the address. funke embraces fresh sound territories without forgetting his past. with already two solo albums on ellen allien’s bpitch control label under his wings and the longplayer “unknown”, that he tuned in with julienne dessagne (aka fantastic twins) under the alias saschienne in 2012 for kompakt, on the shelf, he knows what it means to write and dramatize an album.

all tracks on “lotos land” are well selected. together they built a bewitching story arc. with some singing help from the scottish crooner david wilson, voice of the glasgow based melancholic dance sensation junto club and the tel aviv born musician autarkic, exotic but yet perfect to sing along melodies partly enthral the listeners, too.

and even if sascha funke is part of the club culture since the nineties: his musical memory and sensibility goes way back before the early techno and house eruptions. for his new works, that all had been produced in berlin during the year 2016, he removed the dogma of functionality and shifted into a riskier, more open terrain, that does not offer club sensations mainly.

“i think i would not have made such a diverse album without the time with saschienne. before saschienne i mainly worked sample-based and produced exclusively at the computer. by working with julienne as saschienne i discovered my love for the instrument.

"playing" with the different synths is for me the greatest progress and ultimately also the best pos-sible form of expression for my music.” he confesses.

for his new tracks he used several kind of gear – from a korg arp odyssey to a dave smith prophet 8, moog voyager, solina string keyboard or a yamaha pacifica guitar. stylistically his new orchestra lead him to a mesmerizing meltdown of trance, techno, synth-wave, post-punk and ambient parti-cles.

“the use of all the synths allows you to work more emotional” funke explains and points his finger to the emotional landscape of “lotos land” that delivers enchanted atmospheres, sensible stomping grounds, funky twisted spheres and tragically hip psychedelic zones.

at large there is an unmistakable strong uk influence. be it new wave, pop or early dance and techno stuff. sometimes the bass rolls like in a the cure song, then dreamy synth sceneries arise to stick in the mind.

the cover artwork comes from mule musiq and endless flight hamburg based home illustrator stefan marx. it features a marx styled interpretation of 1901 illustration by the british painter wil-liam edward frank britten, that was made to the poem “the lotos-eaters”, written by the poet alfred tennyson.

the picture as well as the poem, after which funke also named his album, tells much about the record. where the drawing, the words and the music come together, everyone has to find for themselves. only one thing can be said: sascha funke traveled far for his new music to reach an altered state. and nothing else should happen to those, who surrender to his latest music.