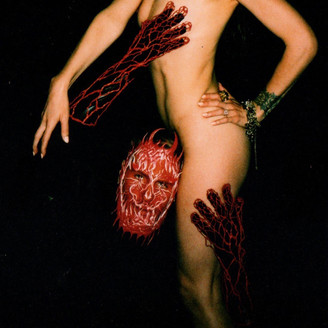 Play All Digital Single
»Love Very Body«, released on 31 January 2020, is the second single off of KARMA SHE’s upcoming debut album »My Naked Devotion« (6 March 2020) on the Berlin-based label Martin Hossbach. The first single, »Passion for the Pray«, was self-released by the artist in late De-cember of last year.

»Love Very Body« is a gushing stream of deep, sub-conscious sensa-tions alongside a bumping UK-garage-inspired beat. The video was di-rected by designer-artist Amehl and situates a New York City living room party getting out of hand.

Berlin-based (and Jerusalem-born) multi-disciplinary artist Carmel Michaeli has constructed the vessel named KARMA SHE to transcend the stage and create extra-sensorial musical performances. KARMA SHE’s bass-heavy electronic musical production is complemented by a ghetto twist of explicit vocals. Together with her creature crew, KARMA SHE creates a highly visual live-set that combines choreography and ec-static ritualistic elements that lure you into her universe — a uni-verse inspired by Michaeli’s Jewish heritage and subcultures. She is the writer, composer, producer and vocalist for KARMA SHE’s music and directs all her performances and music videos with a punk DIY attitude, collaborating with other artists from her community. The project is an ongoing deconstruction of pop conventions; the result is both mystifying and seductive.