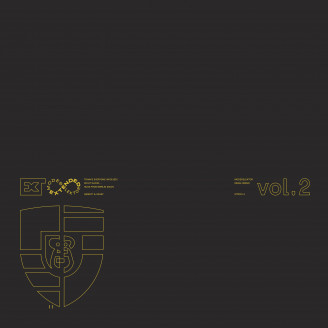 Play All 12"
Modeselektor’s new Extended mixtape consists of 27 previously unreleased tracks, and while the Berlin duo of Gernot Bronsert and Sebastian Szary do want those tunes to be heard within the context of the mix, they’ve also decided that it wouldn’t be right to keep all of those tracks to themselves. Over the next few months, the pair will be releasing a series of EPs, each one built around a different Extended highlight.

First up is Mean Friend, and though the manic, synth-fueled gallop of the title track headlines the package, Modeselektor have also cooked up a number of alternate versions. Un Amigo Malo taps the brakes, transforming the song into a woozy, quasi-hip-hop cut, while the booming Mean Boyfriend trims the fat and ups the volume, leaving behind a chest-rattling drum workout. Other artists also lend a hand: Komm includes a spooky vocal turn from Einstürzende Neubauten frontman and former Bad Seeds member Blixa Bargeld, and the sludgy post-punk of Brush Your Teeth Mean Friend features the angular bass riffs of Shellac’s Bob Weston alongside the rapid-fire drumming of Sepultura co-founder Iggor Cavalera.

On the remix front, Modeselektor have lined up a veritable murderers’ row, with Detroit electro don DJ Stingray, Bristol noiseniks Giant Swan and experimental explorer Telefon Tel Aviv all putting their own stamp on Mean Friend. Although the original song is clearly potent on its own, the real thrill of the Mean Friend EP is hearing how all of these artists — Modeselektor included — harness the track’s chaotic energy and usher its jagged rhythms in bold new directions.
Mehr Outtakes von Modeselektor's Mixtape mit einem Gastauftritt vom Sepultura Drummer Igor Cavalera plus Giant Swan and Telefon Tel Aviv Remixe. Limited edition!