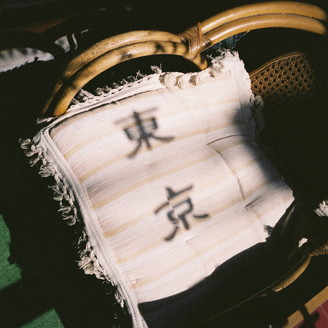 Play All 2xLP
at mule musiq, we’ve focused on shining light on the many aspects of what electronic music can be, putting out house, techno and ambient releases on our main label, while releasing alternative-leaning dance music through our endless flight imprint. but with the launch of our new label, studio mule, we are stepping away from electronic club music for a bit. the label will not be tied to a specific genre, as we will instead focus on releasing any kind of music that we feel is a little bit different and interesting, but somehow make sense in this day and age. for our first batch of releases, we will be focusing on japanese music.

to be honest, i have been watching the recent rise of global interest in japanese music with a skeptical eye, not sure of how to feel about all these labels overseas licensing great albums that were birthed in our country. but then, i was told by somebody i greatly respect that i should do something similar with mule, and put our own spin on it, which sounded like a good idea to me. after a period of procrastination, i finally got around to doing it. we are starting things off with a compilation of japanese disco, boogie and soul music that we selected from a modern dance music perspective — the kind of songs that we feel would intrigue music fans across the world.

at first, i started seeking authentic-sounding disco that sound like it could have been recorded in the states, but after struggling to get licensing rights for many of those tracks, i started to wonder if that was really the direction we should be going in. when we start new labels or projects, we often come up with the title or artwork first, before deciding on the actual music. we came up with the title midnight in tokyo first, which dictated that we needed to find music that would be a perfect soundtrack to listen to at night in tokyo. we ended up compiling a selection of tracks that you could both listen to at home, and play in clubs at certain time slots. the compilation also ended up sounding a lot more pop than we initially imagined…

during the selection process, we did not care whether the tracks have been reissued already or not, and how rare the original copies of the records were. our sole purpose was to gather a handful of songs from across labels, major or otherwise, that we felt could be listened to for many years to come — even after this whole japanese music trend dies down. although we put together this release mainly for listeners outside of japan, the compilation can also be a chance for japanese music lovers to rediscover the greatness of domestic music, as we did during the process.

the compilation starts off with the afro disco classic “mi mi africa” by harmonica player nobuo yagi, which was also included in the compilation mastercuts.

“silver top” is a jazzy fusion disco taken from composer, arranger and multi-instrumentalist nobuyuki shimizu’s first album, which he released when he was 19. the track features singer epo, whom he worked with many times over the years as an arranger.

“samba night” is by vocalist keisuke yamamoto and his band piper, from their masterpiece second album summer breeze. a delightful city pop number that should appeal to tatsuro yamashita fans.

“akogareno sundown” is a japanese soul classic, sang by singer haruko kuwana (the sister of well-known musi-cian masahiro kuwana). recorded in hawaii and produced by mackey feary band, known for the soulful classic “a million stars.”

“koiwa saiko (i’m in love)” is a mellow and groovy track by singer aru takamura, the great-grandchild of sculptor kouun takamura, whose son kotaro takamura is a famed poet and sculptor. can be thought of as japan’s answer to cheryl lynn’s “got to be real.”

“what the magic is to try” is a cult electropop track by honma express, a project helmed by producer kanji honma. hailed as japan’s trevor horn, he is also known as the producer of legendary techno pop band tpo.

“colored music” is a song by colored music, a duo of pianist ichiko hashimoto and her partner atsuo fujimoto, who have gone on tour with ymo. taken from colored music’s sole album, the japanese rare groove treasure is a mesh of new wave, synth pop and jazz influences.

the dubby electronic new wave disco “electric city” is a b side of pop idol group shohjo-tai’s debut 12” single, but the girls aren’t actually singing on it, making the instrumental one of japan’s greatest ’80s dance tracks.

“love is the competition” is a breezy disco jam by okinawa-born bilingual artist hitomi tohyama. featured on her album next door, the song’s melody seems like an interpolation of the whispers’ “it’s a love thing.”

taken from mariah project’s diva yumi murata’s first album, “krishna” is a funky and soulful rockin’ disco cut.reminiscent of chaka khan’s “i know you, i live you,” “live hard, live free” is a song by jazz vocalist eri ohno who is known for her work with dj krush and singing on the soundtrack to anime rupin the third.

“rocket 88” is a melancholic disco number by singer minnie. though the track was released through sapporo’s independent label paradise records, the superb production quality suggests otherwise.

closing out the 13-track compilation is japanese disco staple “tokyo melody,” sang by half african and half swedish american singer shoody and backed by tetsuji hayashi’s disco band the eastern gang.