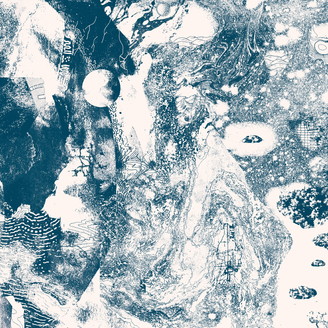 This compilation had been on the label’s to do list for ages but it was only when Twitch and Glasgow’s Fergus Clark started crossing swords over what actually constituted Fourth World music that the project really got going. Twitch decided that co-compiling the release with someone who had a slightly different take on things might make for a more interesting finished product, and so it came to pass that a cohesively thrilling compilation quickly materialised as each of them drew from a wealth of different artists and eras.

For the uninitiated, here’s an extract from Fergus Clark’s sleeve notes honing in on how the term Fourth World (an idea conjured up by Jon Hassell in the early 80s) might be defined -

“What we have attempted to gather across this compilation is a body of work which we feel directly resonates with both the literal definition of ‘Fourth World’ music and indeed our own interpretation of this unique sonic vision; from the work of the late Jorge Reyes, a Mexican musician who combined pre-hispanic instruments with synthesisers and digital sampling, through to the work of organic ambient ensemble O Yuki Conjugate. There are tracks which utilise custom, home-made instruments and there are tracks built from scratch using the latest in digital technology, but the undercurrent tying each piece together is this deeply personal feeling of intrigue and mysterious elation. Strange and unparalleled, this feeling manages to eschew geographic borders and rigid genre movements in favour of something which manages to evoke an inner sanctum, a musical private place for both reflection and assessment. This is music grounded in nor the past nor the present, music which manages to sound futuristic yet remarkably nostalgic. “

JD Twitch is one half of Glasgow’s Optimo (Espacio) and runs the Optimo Music and Optimo Trax labels.

Fergus Clark is a writer, occasional DJ and avid music fan. He is a founding member of the music and art collective 12th Isle.

The 2 x LP version will be housed in a gatefold sleeve designed by the redoubtable Glasgow based visual artists Al White & Jamie Johnson.