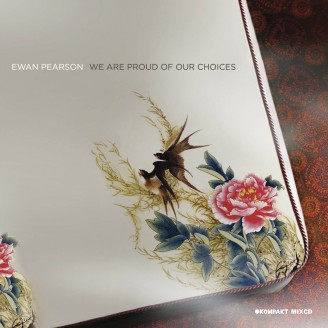 We Are Proud Of Our Choices Ewan Pearson

Play All CD
Our bro-mance with Ewan Pearson began four years ago at Kompakt's annual Sonar beach party in Barcelona. Considered to be one of the most prolific remixers on the planet (see his !K7 released “Piece Work” collection) and his astonishing resume as a producer for Tracey Thorn (Everything But The Girl), Delphic, M83, The Rapture and Lost Valentinos we were immediately struck with the sincerity of the man and his genuine passion for music and life. A gentleman and a scholar in the truest meaning (he is a published academic), our bond was sealed and together with Al Usher they came to us with Partial Arts. Kompakt have gone on to release two truly remarkable Balearic kraut-disco workout singles, “Trauermusik” and “Telescope” plus a remix for Burger/Voigt. Partial Arts remain one of our most endearing acts on the label.

Now, we proudly welcome Ewan Pearson to Kompakt's esteemed mix CD series previously trailblazed by Michael Mayer, DJ Koze, Tobias Thomas, and Superpitcher. “We Are Proud Of Our Choices” is a delightful listen in every sensibility and truly brings his artistic talent as a DJ and producer together in a very personal mix. We certainly hope you enjoy this landmark addition to our series as much as we do and leave you with Ewan's own words about his mix.

“This is the third commerical mix CD I've done. And it was the most daunting - partly because the others have been well-received and I want this to be too and also the fact that there are so many podcasts and mixes out there for free these days. And then there's the pedigree of the mixes that Kompakt have put out - particularly Michael Mayer's first Immer CD and DJ Koze's All People Is My Friends which are two of the best ever made I reckon. They still believe in its value as an art form, if you really take care over it, and in the importance being able to give something back to the people who made the music in the first place. They don't want to give that up - and neither do I. So I spent a lot of time on this trying to make something which will bear lots and lots of repeat listens and that contains a lot of beautiful music as well working as a dance thing too. You don't get opportunities like this very often and I didn't want to waste it.

I've tried to make something that is very Kompakt in sensibility out of lots of my favourite music at the moment - it starts off very intense and melodic - I wanted it to be almost overwhelming at first - and has passages where it's very euphoric and passages where it's deeper or more hypnotic or abrasive or whatever. Hopefully it keeps moving around in mood whilst still feeling "of a piece". There are a lot of key mixes and for much of the CD there are two (sometimes three) tracks running at once. The track IDs are almost arbitrarily placed - there's usually two tracks going wherever you play it but hopefully they fit together musically and you don't really notice.

I spent a lot of time gathering music and at one point had nearly 100 tracks in the long list for inclusion - I think i could have happily made 2 or 3 CDs. There are some very new / unreleased gems on there - Ivan Smagghe and Roman Flügel collaborated for the first time on a new track called "Uno" which I've had for a while and I think will finally be getting a release on Kill The DJ around the time the CD comes out. Similarly there's brand new track from Jamie Jones and Lee Foss in their "Hot Natured" guise for Culprit - the Droog guys in LA were kind enough to send over a lot of their forthcoming stuff and that's just got such a great groove / bassline. Then there's the John Talabot remix of Al Usher's next single for my label Misericord which is brilliant - John's one of my favourite new producers. And there's a special dub edit of my favourite track from the new Little Dragon album that I've done exclusively for the CD. Then there's other great new stuff - a Gold Panda remix, a beautiful track from Lusine on Ghostly, an amazing song called "Blue Steel" from Bot'Ox out of Paris, BDI which is this wonderful strange quasi-industrial disco thing. Some of the tracks are my DJ hits of 2009 - the Xenia Beliayeva, Foog track and the amazing Petar Dundov mix of Gregor Tresher. There are also a few of those private little tracks that have just stuck around for me and refused to go away over the past couple of years - Neville Watson on Rush Hour, DXR's Faderpushing Sunday, the Pitch and Hold track at the start which is just a lovely beatless analogue synth piece.

For the title i wanted to have something declarative and positive - it's a line from an old socialist youth hymn. You can take it all sorts of ways. But there's definitely a sense that in work or life or whatever all we have to show for ourselves are the choices we make, the paths we choose. So we had better be proud of them, I guess."