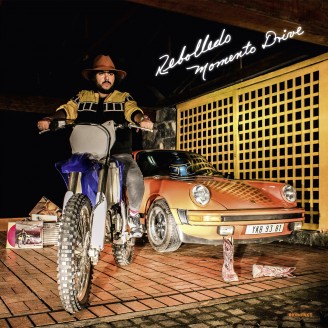 Play All 12"
It surely must be a pretty special DJ mixtape if a label sees the need for a regular release - in this age of total download overload, it's just something you don't do anymore. But along comes REBOLLEDO and proves everybody wrong with the MOMENTO DRIVE mix CD, a persuasive plea for a nearly forgotten format and a high point for a vanishing art form. In fact, we were so enamored with the exquisite selection that we decided to take three extra rare cuts from the mix and put them on vinyl for the MEMENTO DRIVE EP - an intimate look into Rebo's secrecy-shrouded DJ crate and a dream come true for any aspiring deck shark.

"I always liked the word 'momento'", says the DJ and producer, "because of its double meaning in Spanish… as in 'moment' when talking about a space in time or 'momentum' when talking about inertia". And sure enough, the tendency of an object to keep in motion is one important part of REBOLLEDO's very own formula, but it's not the only one: "I truly enjoy the feeling of constant motion - music can take you to places without you even leaving the room. The resulting effect on the body that has nothing to do with bpm amounts or high volume, but all with inertia and power. I like to call that effect 'drive'".

The first major solo outing for REBOLLEDO after his adored full-length debut SUPER VATO (CÓMEME CD 01) from 2011 is a DJ mix - in the hands of an artist as distinctive as the Mexican half of globetrotting duo infernale PACHANGA BOYS, however, the result is just as engaging and idiosyncratic as any artist album. One highlight certainly is WINDSURF, SUNBURN AND DOLLAR - a raucous and headbanging track that has been an integral part of Rebo's DJ sets for quite a while now, but never saw a proper release before. With the "extended raw version" made exclusively for the EP, this relentless, propelling cut finally finds its way onto wax

Another vinyl premiere can be found with the PACHANGA BOYS remix of Slove's FLASH, originally a digital-only release and a particularly popular DJ choice due to its hypnotic arrangement and well-aimed vocal snippets. By contrast, REBOLLEDO's deliciously mangled rework of Red Axes' CAMINHO DE DREYFUS already saw a successful print run via Jennifer Cardini's Correspondant outlet last year, but has completely sold out since then - which comes as no surprise, considering the insane amounts of dirty funk crammed into the small space of one ballsy, sandblasted piece of music.