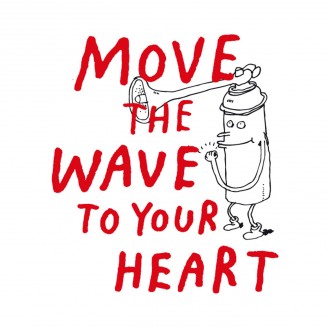 Move The Wave To Your Heart Various Artists

Play All CD
Still speechless and frightened of all this earthly powers that came over Japan, Mule Musiq pool their strengths to continue its musical mission and release a exclusive mix cd by the Swedish heartbreaker Sebastian Mullaert,best known as one half of the staggering duo Minilogue, called „ Move TheWave To YourHeart“. In order to support all needy people of Japan that suffer under the aftermath of the natural catastrophe, all earnings of the sale will be donated into Japan Red Cross Society earthquake fund.

To bring home the message in grief: we need to dance on in order to get an airiness spiritual power that only emerges when the human soul get lost in music. Sebastian Mullaert aka Minilogue knows about this unspoken sageness and mixed an eleven track strong charity journey towards the widely ramified Mule Musiq opus, that travels heartfelt from lively African influenced house right into the cold dubby heart of a German techno club. His journey starts tribal while fusion the kalimba percussion driven house deepness of the track „Kalimba dance“, produced by the new Mule Musiq signing Da Capo from South Africa, with the bass heavy „Japan Japon“ rhythm voyage of Mr Raoul K, the man from the Ivory Coast that lives deep in the north of Germany. One of his brothers in spirit is Culoe de Song, who subsequently opens Minilogues mix with his emotional house trip „Ambush“ towards an atmosphere that slowly grows from a summerlike outdoor party mood into a sweaty compact club feeling. The first real step into the midnight arena is „Capital City“, a driller killer track by another new Mule artist from South Africa called Moodswing, that perfectly migrates after six breathless minutes into „Shades of grey“, a cool funk techno excursion by Kab & Mac. From that moment on Minilogue digs deep in the shallows of the Mule Musiq catalogue to find some of his solo and some of his Minilogue tracks like „Älva“, „Jakata A“, and „Hundraelva“ beside arrangements like the touching „The Search and the Breaks“ by KAB  - all made with dubby swings and demanding rhythms in order to go off in a peaktime situation for late night owls that like to dance and not to march. As any DJ with the right feeling for a completed musical trip Sebastian Mulleart fades out his mix with his airy twelve minute remix of „Ocean Wave“, orginally produced by Kuniyuki Takahashi aka Koss. A long goodbye that tickles your fancy of more spheric driven tracks which oscillate between techno and house while taking the term deepness seriously. A stirring mix straigth from the heart made for a good cause to shakle the senses of all lovers of warm electronic rhythms.