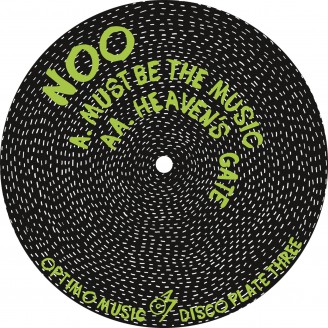 Play All 12"
Noo are Daze Dasen (aka Plastique De Reve) and Sami Liuski (aka Bangkok Impact / Putsch '79. They return with their second 12" (Noo 2) and the third in the Optimo Music Disco Plate series. Their first 12" was a summer of 2014 smash hit. This second double A side 12" single is built out of imaginative sampling combined with analogue machines. Phenomenally produced, modern disco epics that fully work their magic in a club setting.

"Must Be The Music" : Absolutely guaranteed not to appeal to moody techno fucks. Epic disco-ness abounds. Features breakdance potential breakdown at around 6 minutes. Already huge with Pete Waterman.

"Heaven's Gate" : a soundtrack for evacuating the planet. Road tested on our last star trip to Sirius.