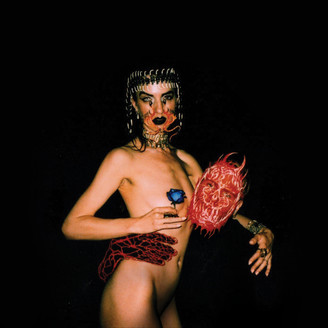 MY NAKED DEVOTION KARMA SHE

Play All Digital Album
Berlin-based (and Jerusalem-born) multi-disciplinary artist Carmel Michaeli has constructed the vessel named KARMA SHE to transcend the stage and create extra-sensorial musical performances. KARMA SHE’s bass-heavy electronic musical production is complemented by a ghetto twist of explicit vocals. Together with her creature crew, KARMA SHE creates a highly visual live-set that combines choreography and ecstatic ritualistic elements that lure you into her universe — a universe inspired by Michaeli’s Jewish heritage and subcultures. She is the writer, composer, producer and vocalist for KARMA SHE’s music and self-directs all of her performances and music videos with a punk DIY-attitude, collaborating with other artists from her community. The project is an ongoing deconstruction of pop conventions; the result is both mystifying and seductive.

»MY NAKED DEVOTION« is KARMA SHE’s debut album. It will be released both digitally (on Martin Hossbach) and as a cassette (self-released). The album was written in the past two years at the artist’s Neukölln studio and at Amplify Berlin studio at Berlin’s ACUD venue, with mentoring from Max Boss from the Duo Easter, an initiative supported by Musicboard Berlin. To celeberate the release, KARMA SHE has created a new performance featuring live video collaboration from Goldenliustra, DJ Gina Felangi and drag artist Dyno Dada. The show will be premiered at the prestigious Volksbühne, at Grüner Salon, on 6 March 2020.

»LOVE VERY BODY«, released on 31 January 2020, is the second single off of »MY NAKED DEVOTION«. The first single, »PASSION FOR THE PRAY«, was self-released by the artist in late December of last year. »LOVE VERY BODY« is a gushing stream of deep, sub-conscious sensations alongside a bumping UK-garage-inspired beat. The video for the latter was directed by designer-artist Amehl and situates a New York City living room party getting out of hand.

»MAKE ME KITTENS«, released on 20 February, is the third single off of »MY NAKED DEVOTION«. The video was self-directed and edited by KARMA SHE and shot DIY-style, using a GoPro, on a bicycle on a grey autumn day in Neukölln. The artist is cycling along a canal, singing about contemporary dating, lost hopes and bursted bubbles with five silver helium ballons spelling KARMA braided into her hair.

»SECRET LIGHT«, relesed on 5 March, is the fourth and last single from »MY NAKED DEVOTION«. Again, the video is self-directed and edited by the artist. We see the artist dressing up (and down) her younger pot-smoking brother while the message of the song is that real beauty comes from within. The video was shot in a bomb shelter in Tel Aviv which used to be the artist’s studio when she was still living in Israel.