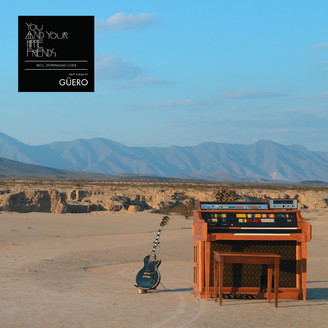 My Way My Rules Güero

You And Your Hippie Friends

Play All 2xLP+DL
Rebolledo’s YOU AND YOUR HIPPIE FRIENDS imprint grows its groove footprint on international dance floors with the full-length debut of GÜERO, the latest vinyl outing from the Hippie Dance sister label and also its first fully fledged album project. To attentive hippie friends, the artist name should ring a big, funky bell – one that sounds exactly like the cut “Convertible Ride” from the notorious “A Very Nice Combinado Volume Uno” 12” release (YAYHF 01).

Back then, our hero was travelling under the somewhat more convoluted “El Güero Fresa” monicker, but has since dropped some of those conceptual pounds in an effort to reach maximum sleekness. In the same vein, his debut album is a testament to ultimate funk-a-ficiency, digging deep into fizzy arpeggios and chunky basslines - and the occasional guitar cameo, giving tracks such as bubbling synth opener ELEKTRONIQUE, the neon-lit NIGHT CRUISING, bouncing electro disco roller ALTO FINAL or the programmatic SPACE DRIFTER just that little extra riff.

GUITAR MAYHEM, however, is anything but – you’ll discover a pretty dank bouncer and certainly not the squealing meltdown one would expect. TECHNO MINIMAL doesn’t do what it says on the tin, either, opting for an energetic bass ‘n’ organ workout instead. By now, you’ll begin to understand why the album’s called MY WAY MY RULES: GÜERO takes whatever sonic path he desires, no matter what - which is precisely why he chimes so well with YOU AND YOUR HIPPIE FRIENDS’s steadily expanding motley crew of rave misfits and studio drop-outs. The way of the hippie is indeed a mysterious one.