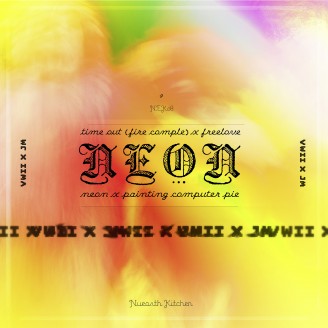 Play All 2x12"
Seattle producer Jon McMillion has been infiltrating headphones and weirding up clubs with his sublimely unusual techno and house tracks since 2006. His restlessly mutating output attains another bizarre peak with the Free Love EP, released jointly with his new pseudonym VisionWorks II. This new four-track single solidifies this idiosyncratic veteran’s position as a producer of international stature.

“Time Out (Fire Complex),” is a slightly cheerier tech-house cut that tilts the dance floor at strange angles. Alluringly hollowed-out woodblock hits and motivational 4-on-the-floor beats accentuate a low-slung 5AM anthem that’s as psychedelic as your next ketamine-trip. McMillion’s slurred declaration, “I’m taking time out,” instills an oddly uplifting feeling to this epic excursion to the dark side. Vision Works II’s acutely honed aural madness makes an essential addition for adventurous DJs’ arsenals.

The title track exudes an intriguing subterranean vibe from the start, with McMillion’s pitched-down muttering creating a foundation of low-level anxiety under distorted bass and kicks and a paranoia-inducing synth motif that could’ve laced a ’70s giallo film. But make no mistake: This is dance music (technoir, if you will), albeit some of the darkest, most twisted ever committed to wax.

“Neon” thrusts you immediately into a bustling nocturnal milieu of alluring female vocals, shimmying 4/4 rhythms, hissing cymbals, and synths that warble “ow.” In patented McMillion fashion, the track combines sly sensuality with undercurrents of chaos. Subverting equilibrium is a daily operation for this cat; nothing is ever straightforward or one-dimensional in a Jon McMillion work.

“Painting Computer Pie” crackles into life with subtle granular synthesis and insistent disco kick drums. Soon, though, McMillion threads in all sorts of unusual details in the forefront and the margins, creating a sense of encroaching doom and a magic-mushroom trip gone awry. Almost halfway in, the rhythm shifts into something much trickier, as congas patter and keyboards stridently slant and swirl, while delayed, errant voices dart in the background. This is perhaps McMillion’s most psychedelic cut yet, in a catalog abounding with them. Get on his strange, lofty level.