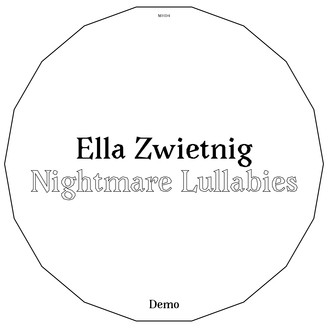 Play All Digital Single
Ella Zwietnig's demo compilation »Nightmare Lullabies« marks the fourth release on Martin Hossbach Demo, the new sub-label by Martin Hossbach, which exclusively releases (digitally only) demo recordings. Ella Zwietnig says: »These pieces are the result of a phase in which I was troubled by insomnia. Since at the time, with our group UMA, we had our recording studio at home, I often went to the studio at night and tried to sleep on a mattress on the floor. When that did not work, I made music – disconnected, just what came to my mind. As the sleep disturbances lasted a long time, I eventually found the term ›Nightmare Lullabies‹ fitting and indicative of the music that I had written during these stressful nights.«