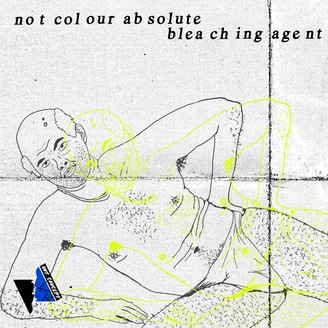 Play All Digital
Hot Concept continues with a third release, ‘Not Colour Absolute’, courtesy of a hero of the UK underground, Bleaching Agent. Best known for his blistering techno and glorious legacy as one half of surprisingly influential gabber-italo duo Blacknecks, Bleaching Agent’s debut release on Hot Concept takes it's title from a line by French Decadent poet Paul Verlaine, who might well have approved of the record's unprecocious celebration of hedonism, had he not died well over a century ago.

On ‘Set You Going’, a driving, perhaps even glam guitar riff is the basis for an undulating journey through elements of EBM, kosmische and post-punk, rising and rising into analogue hypnosis and kissing off with a blast of senseless distortion. If the first half of ‘Not Colour Absolute’ could soundtrack peak time at a meat market, Bleaching Agent cleans up the outright rave offal for the EP’s second-half, taking a hose and some disinfectant to his own production style. Instead, ‘On Returning’ is a warm, trippy house anthem, acid lines dancing around binary vocal samples that seem to be attempting to communicate something potentially quite lovely.

Finally, ‘Any World Where You Are’ illustrates a perhaps surprisingly tender side to Bleaching Agent’s style, a wide-eyed sign-off in comparative slow-motion, rich in melodic electronic touches that recall Kraftwerk, The Orb and the cathartic desire to go home and change your tee shirt.

Hot Concept is a Berlin-based record label and occasional party series, founded in 2018 by John Loveless.