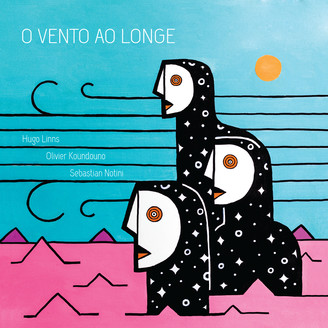 Play All Digital Album
»O Vento ao Longe« is the first recording of the trio Hugo Linns, Olivier Koundouno and Sebastian Notini, the latter already having released an album (»Milagres«) on Martin Hossbach with another trio (including Tiganá Santana and Ldson Galter) only a few months ago.

Linns and Notini, although living in the same country, Brazil, first met in Cape Verde in the central Atlantic Ocean, each performing with a different group on the island. Some time after, Linns got in touch with Notini suggesting to make a duo record. Each started working in their studios in Recife and Salvador de Bahia respectively, when Linns suggested inviting cellist Olivier Koundouno, turning the duo into a trio. Linns and Notini then met in Recife, in the Northeast of Brazil, capital of the state of Pernambuco – the state then also supported the musicians with a grant. Linns and Notini recorded the founding parts of the album while Koundouno was joining in from the distance, from Switzerland.

The beautifully delicate, intricate and dense music the trio has come up shows aspects of both traditional and modern Brazilian harmonies and melodies and is mixed with West-African and European Baroque styles. »We have approached every song a little differently, more like a painting. Each one has a slightly different colour,« the trio says.

Hugo Linns, who’s from Recife, plays, among other instruments, the Brazilian Viola Dinâmica and the Viola de 10 Cordas: guitar-like instruments with ten strings in a double-set (two strings each). In his music he is influenced by the master singers from Pernambuco, rabequieros (fiddler) and mirandeiros, masters of the Miranda folklore style typical for Brazil’s northeast.

Olivier Koundouno is a French-Ghanaian cellist who feels equally at home in the worlds of classical, jazz and pop music. He plays with a lot of musicians and in various bands, works as a producer and composes for documentaries and feature films.

Sebastian Notini comes from Stockholm and has been making music, recording and producing other artists in Salvador, the capital of the Brazilian state of Bahia, for many years. He is a percussionist, on »O Vento ao Longe« using a plethora of percussion instruments, e.g. atabaque, agogô, tama, bendir and caxixí.

The cover artwork is by Glauber Arbos who, like Hugo Linns, is from Recife. In his work he mixes popular graffiti art from the Brazilian Northeast with intriguing robotic figures. Graphic design: Marcela L’Amour.

On YouTube and the label’s Instagram account you can find films and photos by Jão Vicente and Luara Olivia who were present during the recordings in Recife.