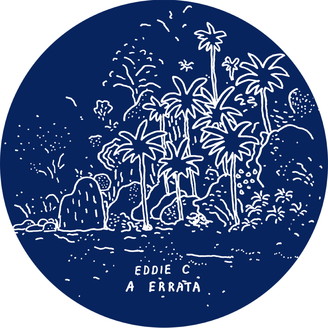 On The Shore Eddie C

Play All 2xLP+7"
“hopefully they do not fit into too many sub-genre categories” says canadian producer and dj ed-ward currelly aka eddie c about his twelve new tracks.

they are the body of his new album “on the shore” - a compelling musical trip of drifting repetition in rhythm and melody. the album was recorded entirely in his studio in the wedding district of berlin, on the shore of the panke river, his new favourite part of a city.

eddie confesses: “berlin has been so crazy... i have mixed feelings sometimes. such extreme highs and lows! the emotions i've had here are like none i've ever had to deal with before. i don't know if the city is haunted or what...

i've had many sleepless nights especially in the wintertime. i suppose the music is a mix of feelings and inspiration from life here.” it truly is, as the story arc of his sample-laden longplayer oscillates between sweet sadness and warming blissfulness.

there are strings that can evoke tears. there are synth lines that may generate dreams. there are guitars that are able to introduce levitation. but not only berlin itself is part of this wonderfully sen-sitive round dance.

c’s life as a traveling dj must also have had a great effect on his art. ”i've always written music and always been deejaying. they both came around the same time when i was very young.

but i've never quite connected the two. i've always thought that they were very different avenues of expression. all the travelling in the last while has been a beautiful experience and so very inspir-ing and exhausting.

the strangest part has to be having friends all over the world that i am developing relationships with for a few days at a time, once or twice a year. very unnatural! or is it wonderful? likely both!

one thing i really wish i had more of is routine. something that many people wish to escape. it's the unfortunate human condition eh?.. grass is always greener.” he reveals. regardless of what has more influence on his music – the travel or the city of berlin – for a listener it makes no difference where the emotional subtext is originated.

also eddie did not dismiss what he has always enjoyed: arranging a mix of instruments, synths, samples and drum machines, that cuts deep into your soul. each track is an intimate meditation.

sometimes it grooves in the downtempo fields, sometimes cosmic disco calls the tune and house is around too, but in quite an in-depth wrapping, all propelled by pulsing keys, pitch bends and crash-ing drum loops.

the routine eddie talks about must be somewhat a part of his life as his usage of samples, his rhythmical accuracy and his sense for small but extra touching melody particles are not just com-ing from one spontaneous surge of emotion.

and he was not alone for the recording of every tune. he also enjoyed the company of his norwe-gian buddy rune lindbaek, known for fearless edits and tripping leftfield dance music. he is a guest on the handsomely wrong spelled track “auf der ufer” - a sublime synth-laden spacey tune in the heart of a playful album full of contrasting, deeply atmospheric stages in longing, that range from swinging and propulsive to blissed-out and bittersweet sensibilities.

“man is only fully human when he plays" the german poet, philosopher and playwright friedrich schiller once said. the music of eddie c proves this sageness. it is full of lust for life, party-hearty and at the same time about really strong feelings.